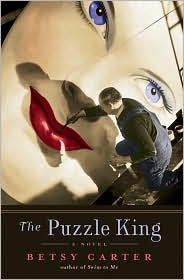 I need to be more adventurous when it comes to choosing books. I saw Betsy Carter's The Puzzle King in an upcoming releases list but decided against reading it because it touched on the Holocaust. I thought it would be sad and depressing. However, I received an unrequested copy for review and decided to pick it up immediately. The short of it -- I really liked this book.

This is the story of Simon Phelps, a young boy who came to America by himself when he was nine years old and also the story of his bride to be, Flora Grossman. Flora and her sister came to America from Germany in their teens while their mother and sister stayed behind. Simon is an artist and we see his growth from a young immigrant into a successful businessman. He invents the cardboard puzzle and becomes very wealthy. Yet he is always haunted by the fact that he can't find any evidence that his family in Latvia survived after he left. Flora has to deal with the fact that her sister, brother-in-law and niece could be in danger because they are German Jews. This novel is about love, loss and the ways in which we redeem ourselves by saving others.

Carter has written this novel based on her family history and it is an incredibly sweet and touching story. Even at the saddest moment of the book, I had no tears because I felt like destiny was running its course. None of the characters are perfect but you feel that most of them are trying to be the best they can be.

This novel has just been released by Algonquin Books. The hardcover artwork is beautiful, isn't it?

Learning through the lives of others,
K


Support our site and buy The Puzzle King