"There is something terribly wrong with Mr. Augustus T. Percival." 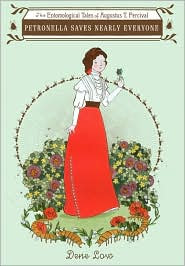 It isn't every day that you come across a book with a title like The Entomological Tales of Augustus T. Percival: Petronella Saves Nearly Everyone. When Alea mentioned this new book from Dene Low on her blog, I knew I had to read it! She admits to being in love with it and I will second that. The writing is charming and witty and Petronella is a fantastic lead character.

Petronella is a sixteen year old orphan being raised by her guardian and uncle, Augustus T. Percival. On the day of her coming out party, Percival inadvertently swallows a beetle during tea. In a strange turn of events, this causes him to have an insatiable appetite for insects. He runs around the yard, snatching spiders from corners and ants from their hills, eating them whether dead or alive. This isn't the worst of Petronella's problems though because a Panamanian diplomat and an actress end up being abducted from her party. Luckily, she and her friends are bright and inventive and they set out to solve the kidnapping.

One of the things I loved most about this book was James, or should I say the idea of James. He is the older brother of Petronella's best friend, Jane, and is the young man that Petronella fancies. She always notices the way he looks, wonders if that slight intonation in his voice was a confession of love, wishes that he would stand a bit closer. It's so perfect for a sixteen year old character! And it wasn't written in a mushy way but just in that perky but angsty way that any teen will recognize. It really took me back and once again, I wished that this book had been around when I was a young teen.

You should really visit the author's website. It's adorable! It also says that Low is working on two sequels to this book along with eight (!) other books. Let's hope that these ones make it to the top of the to-be-written pile. I can't wait to spend more time with Petronella. She's smart and brave and resourceful and fun to read about.

Hoping the kids fall in love with Victorian England and Petronella,
K


Support our site and buy Petronella Saves Nearly Everyone: The Entomological Tales of Augustus T. Percival

Email ThisBlogThis!Share to TwitterShare to FacebookShare to Pinterest
Labels: England, YA fiction