"When Hayley arrived at the big house in Ireland, bewildered and in disgrace, rain was falling and it was nearly dark." 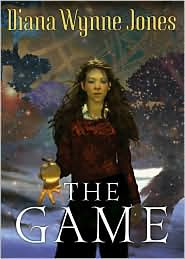 Every time I open a new (to me) Diana Wynne Jones book, I prepare myself for an adventure. The Game definitely was an adventure but it was one of the few stories that I wasn't quite satisfied with.

Hayley lives with her Grandma and Grandad because she is an orphan. Grandma is overly strict and controlling but, if she finds him alone, Grandad will usually teach her about "forbidden" things like the solar system and cartoons. One day, he tells her about the most forbidden topic of all -- the mythosphere. This is a network of strands that circle the Earth and contain the various myths from human culture. Strands grow thick when similar myths are combined by topic. Then one day, Hayley meets a man who takes her for a walk on one of these strands. This opens up a new world to her and she is happy. Unfortunately, her grandma doesn't see this as a good thing and banishes her to an aunt's home in Scotland. As a stopping point, Hayley visits another aunt in Ireland. Here she finds a troop of cousins and she joins them in a secret game played in the mythosphere. Apparently, this is the true home of her family and Hayley soon learns that there is much more to her history than she ever knew.

This story was incredibly unique and interesting. However, I found myself wanting more. Even though this is a YA book, I think it could have gone into a bit more detail with the myths and such. If you aren't familiar with things like Roman gods and the Zodiac-- which I would venture most American teens are not --then it would be hard to catch on to the nuances of this book. Still, this was a nice little fantasy book that I enjoyed. Now if they could just get a less freaky cover ...

Trying to catch a star,
K


Support our site and buy The Game

on Amazon or find it at your local library.
Posted by Kristen M. at 12:17 AM