"The guard at Exeter warned him he would have to change at Dulverton ..." 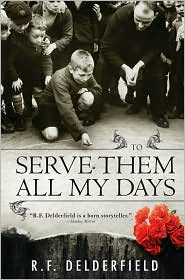 To Serve Them All My Days, my second experience with R.F. Delderfield, was a mixed but pleasant one. The story and the setting were quite enjoyable but in reading two of his books so closely together, I also noticed his non-favorable portrayals of most women.

During World War I, Welshman David Powlett-Jones is injured and shell-shocked and has returned to England to recover. He has an unconventional doctor who decides that the best cure for "P.J." is to be immersed in a quiet, self-contained community with a strong sense of usefulness and responsibility. There is an opening for a history master at Bamfylde School, a small public school in Devon, and though he has no experience teaching and no degree, the headmaster Algy Herries sees something in young David that qualifies him for the position. Through the years, P.J. faces many trials and hurdles but finds that Bamfylde is in fact his salvation and his cure.

I feel that this book is foremost an ode to public schools. Bamfylde was modeled on West Buckland School which Delderfield attended for a few years after spending time in a string of poorer schools. It's obvious that he cherished his time at the school and that he strongly believed that these institutions, when properly run, could instill young men with character and integrity, qualities important to the future of England. To this end, Delderfield populated his novel with many beloved characters such as Headmaster Algy Herries and Powlett-Jones. Those dissonants who value test scores more than community never truly become a part of the Bamfylde family and they are removed from the story in many different ways.

Though Delderfield gives insight and intelligence to many of his male characters, he is not as generous with some of the female characters. I noticed the same shortcomings in God is An Englishman. In both of these books, the strongest female characters willingly give up their positions in business and politics to have families and seem somewhat satisfied to have the burden of thought and responsibility taken from their shoulders. They also tend to be overly willing to physically satisfy the protagonists with no expectations of commitment -- in other words, these ladies are cool with one-night stands. One character in this book is somewhat redeemed by receiving a position of authority at Bamfylde but instead of holding the opinion that this gives her a chance to exercise her mental faculties and use her education, she is said to love the job because of her connection with the children. She is praised for her intuition and kindness but only rarely for her brains. I know that this is a view that would be more acceptable in the early twentieth century but the novel was written in 1972 and could have been a bit more generous toward women.

The second purpose of this story is a criticism of Britain's political and diplomatic decisions between WWI and WWII. The political portion of the story is less prominent but it is obvious that Delderfield felt that Britain made poor choices after World War I and missed opportunities to prevent the disaster of World War II. He seems to feel that there were certain lessons that should have been learned from historical events even before the first World War. Knowing very little about the options open to England during these twenty years, I can't say if Delderfield's views are universal or if they belong to a certain political persuasion.

Overall, I enjoyed this book. It is a well-formed story of one man's recovery and rebirth through the traditions of England. I really fell in love with David Powlett-Jones, cheering his successes and mourning his losses. The novel was occasionally confusing with the scores of nicknamed youths that passed through Bamfylde but Delderfield does a good job of reminding the reader of the previous role that each boy had in the story. Delderfield's love of the boys and the teachers is contagious and provides a touching tribute to this time in British history.

Out of curiosity, has anyone seen the BBC's To Serve Them All My Days miniseries from 1980? I'm deciding whether to watch it or not.

Ever more an Anglophile,
K


Support our site and buy To Serve Them All My Days