"In a distant and second-hand set of dimensions, in an astral plane that was never meant to fly ..." 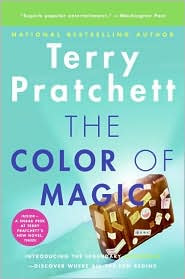 It's rare that the first line of a book can make me laugh. In fact, it may not have happened ever before. But this first line from Terry Pratchett's The Color of Magic ("Colour" in its U.K. home) had me laughing out loud immediately. It wasn't my last audible guffaw of the book either. If I ever felt sad about having read all of Douglas Adams' books, I now have the entire Discworld series ahead of me.

I'll be honest, if this book had the modern cover that is shown here, I probably would have picked it up a long time ago. However, the original cover is so incredibly "fantasy" and shows one small scene of the story that happens to have trolls or something in it and I thought that the whole book was like this. Now don't misunderstand me ... this is totally a fantasy book. But I really am not into the whole "creatures" scene except for Tolkien's books. This one is really more of a "buddy pic" set in a fantasy world. Here's the Powell's synopsis --

On a world supported on the back of a giant turtle (sex unknown), a gleeful, explosive, wickedly eccentric expedition sets out. There's an avaricious but inept wizard, a naive tourist whose luggage moves on hundreds of dear little legs, dragons who only exist if you believe in them, and of course THE EDGE of the planet...

This is a fun, light read with some very British humor and some adventure and a whole world of possibilities ahead. I plan on reading through the various Discworld lines (the travelers, witches, Death and more) over the next few years.

Moving a little to the right on the nerd spectrum,
K


Support our site and buy The Color of Magic