"The sun rose slowly, as if it wasn't sure it was worth all the effort." 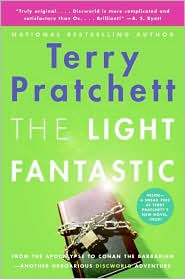 As the second book in the Discworld series, The Light Fantastic continues the story of the wizard Rincewind and the tourist Twoflower. This is also the second book that I've read and I think that Terry Pratchett did even better with this novel than with the first. It had more of an overall purpose and really did a good job of expanding on the characters introduced in the first story.

In this story, we pick up with Rincewind as he is falling off the edge of the Discworld and Twoflower is leaving in a bronze spacecraft. Suddenly, a magical shift happens and both of these men are returned to the land. They meet back up and find that they are being tracked. They journey through the land, meeting new friends and avoiding capture -- all while trying to figure out what part they have in saving the Discworld from the large red star that is heading their way.

I really enjoyed the development of the Rincewind character in this book. There are a few more books that feature him so I will definitely continue on his track. Right now, though, I think I might start a new line -- either the Witches series (Equal Rites) or the Death series (Mort). Death is a hilarious side character in these first two books and I would love to see what Pratchett does with him as a main character.

Exploring this web of a series,
K


Support our site and buy The Light Fantastic