"They stormed out of the dustcloud in a solid, scurrying mass, horse and foot in about equal proportions ..." 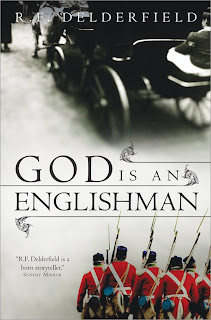 Although its size is formidable, R.F. Delderfield's God Is an Englishman is worth almost every page. First in the Swann saga, written in 1970 and recently reprinted by Sourcebooks, this is a novel of beginnings.

Adam Swann is a British military officer in India that has lost his taste for the service. His fortune is made when he recovers a beautiful and highly-valued ruby necklace after a battle. He takes the booty and makes for home, determined to start a new life -- one with a purpose other than domination and warfare. A chance meeting with a railway man prompts him to choose his new business -- a horse-and-cart transport company that services those areas of England that the railways have left behind. He sets out to survey the land and, again by chance, comes across a runaway teen who will become his wife. The novel then follows the growth of Adam and Henrietta's marriage and family and the building of his business. Both are tested and strengthened through times of gain and loss.

This large book (over 600 pages) covers a mere nine years in the life of Adam Swann. Though a few passages seemed repetitive, the bulk of the book is fresh and well-written. There are many topics addressed from the nobility of the tradesman to the role of women in Victorian England. Also, if you aren't familiar with the geography of Great Britain when you start this book, you will have a much better understanding of it by the end! The only thing I regret not doing is pulling out a map while I read so that I could better understand some of the territorial discussions. There is obviously also quite a bit of history in the narrative including the death of Prince Albert, the passage of the first British labor laws and a certain incident at Staplehurst that any fans of Dickens will know about.

While none of the characters in God Is an Englishman are flawless, you come to care for many of them. This, I suppose, is the impetus to continue this story through two other novels, Theirs Was the Kingdom (recently released) and Give Us This Day (June 2010). Though I don't have a burning need to continue through the saga, I think that the chances are high that I will read the other two books. Delderfield is an authoritative but friendly author and am glad to see his stories back in print.


Support our site and buy God Is an Englishman