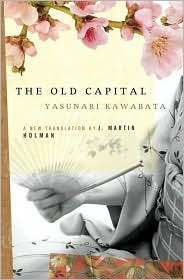 Tanabata of In Spring it is the Dawn has started a Japanese Literature Book Group. As I have never read any Japanese literature, I thought this was a great way to start without the pressure of having to choose my own books. A new book will be chosen every two months and the inaugural choice was The Old Capital by Nobel Prize winning author Yasunari Kawabata.

This short book (160 pages) is actually two stories in one -- the coming of age of Chieko, a girl who follows the traditions of the past, and the inevitable aging of the ancient city of Kyoto, Japan's one-time capital. As Chieko contemplates her future and that of her own aging parents, she is confronted with information about her past that may change everything for her. We follow Chieko and her father as they explore the traditional sites of Kyoto and participate in some of the many festivals and rituals still performed even in the early 1960s.

There was so much to learn in my first literary introduction to Japan. The first thing I noticed was that Japanese does not necessarily translate smoothly to English. Many of the strange phrasings and cadences that you hear in translated Japanese animated films were also present in this book. So in a way it was familiar but only in an obviously inaccurate manner. Secondly, the pacing and movement of time in the book was much different than in Western literature. The foreword in my edition said that this story was originally published in the daily newspaper in 100 installments. I would have been really interested to see where the breaks were between installments. I think it might have brought more sense to the pacing of the book. Finally, this book gave me a definite interest in finding out more about Kyoto -- both its past and the current state of the city. It was definitely one of the most interesting characters in the story -- especially since I had problems connecting with Chieko.

The next book group selection is one that was already on my TBR list-- The Housekeeper and the Professor by Yoko Ogawa --so I will definitely be participating again.

Embarking on a literary journey,
K


Support our site and buy The Old Capital

on Amazon or find it at your local library. We borrowed our copy from the library.
Posted by Kristen M. at 12:12 AM