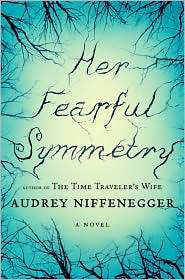 Many readers waited with baited breath for Audrey Niffenegger's newest book, Her Fearful Symmetry. Now that it's here, some readers have already rushed through it and their opinions have been good for the most part. Carl thought it was a "probably should read". Lenore is torn between sort of liking it and really liking it. Simon is pretty sure it's going to become one of his favorites. I usually don't read reviews of a book I'm planning to read in the near future so I skipped the summaries and just read the impressions in these posts. My views ended up being very similar to theirs.

(Warning: This review is mildly spoilerish as to the tone of the book but not to any plot elements.)

Edie and Elspeth are twin sisters that had a falling out when they were young adults. Edie ended up living with her husband Jack in the States and Elspeth stayed in London and lived her own life. Now, twenty years later, Elspeth has died of cancer and has decided to leave her flat and her money to Edie's twin daughters, Valentina and Julia. The girls have never been able to decide or agree upon their futures so this seems like a lucky break. On their twenty-first birthday, the girls legally inherit the estate and move to London. What they find is a flat that looks over the well-known Highgate Cemetery and a pair of strange neighbors -- upstairs is a married man whose wife has just left him because of his severe O.C.D. and downstairs is Elspeth's partner who is still having problems coping a year after her death. As the girls spend more time in the flat, they find that books and clothing aren't the only things that Elspeth has left behind. They also discover that their special relationship as sisters might not be as idyllic as it once seemed.

When I started this book, I thought that this was one of the best books of its kind that I had ever read. By the end, I wasn't so sure. Niffenegger's writing is fantastic throughout the whole book. There's no fault there. My problem was with the direction that some of the characters took. I saw the major plot twist coming but hoped that it wouldn't actually happen. It wasn't that it was a poor plot choice. It was just incredibly heart-breaking and I hoped that the book would go in a different direction. It didn't but I would have to say that there were so many things to like in this book that I enjoyed it nevertheless. It was a fantastic spooky, gothic read and has inspired me to learn more about Highgate Cemetery. I plan to visit the cemetery and I may even revisit this book at some point.


Support our site and buy Her Fearful Symmetry