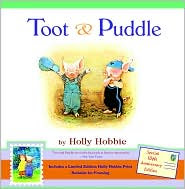 Until Z came, I knew nothing about Holly Hobbie except for the calico-wearing, simple-living character that was on one of my lunchboxes when I was a kid. The real Holly is an artist that created that character for American Greetings in the 1970s and named it after herself (Holly is her middle name and Hobbie is her married name). In the 1990's, Holly had another idea and created Toot and Puddle. Now there are ten Toot and Puddle books and a television series. We received two books that feature these characters as a shower gift when Z was born.

In the first book, just called Toot & Puddle, we are introduced to two young piglets who live together in a place called Woodcock Pocket. Puddle loves their home and is content staying there. Toot, however, has a bit of wanderlust and spends a lot of his time traveling and sending postcards back to Puddle. In this book, he sets off on a world adventure -- going to Africa, Egypt, the Solomon Islands, India, the Alps, Spain, Antarctica, France and Italy. Though Puddle enjoys hearing from his friend, he also enjoys the simple pleasures and routines of home. And when it comes time for Toot to return home, both little piggies are excited and ready to be together again.

In some of the other books, Puddle takes a chance and travels but in others he is still content staying home -- and there's nothing wrong with that. The other book that we own is called Charming Opal. In it, Puddle's cousin Opal comes to visit and they show her all there is to see around Woodcock Pocket and have an adventure when she loses her tooth. Two that we checked out from the library are Toot &Puddle: Top of the World and Toot & Puddle Take a Leap!. One is about world travel and the other is about a closer-to-home but higher-in-the-air adventure.

Toot and Puddle can be found online on the National Geographic Little Kids website and on the Noggin website.

This little piggy went just about everywhere,
K and Z