New Release: In My Father's Shadow 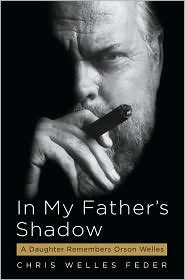 I don't read memoirs and I certainly don't read celebrity biographies. And yet, a few years ago I read Vincent Price: A Daughter's Biography

by Victoria Price and loved it. When I saw In My Father's Shadow: A Daughter Remembers Orson Welles by Chris Welles Feder in the Algonquin Books catalogue I was hoping for the same sort of experience and so I requested a copy for review. Unfortunately, Welles was not the type of man that Price was and didn't have an entirely healthy relationship with his daughter.

Chris Welles Feder--named Christopher by her somewhat eccentric father--was the product of two show business parents. They split while Chris was young and while Orson was around, he was usually busy working. While always calling Chris his "darling girl", he would forget to turn up for lunch dates and be away on movie shoots for months at a time. Chris grew up idolizing her father and idealizing him because of his genius even though he was sometimes unkind to her in little ways. Through two more wives and two more daughters, Chris remained the most important woman in his life for many years until they had a falling out. When she reunited with him years later, he was living with a mistress -- the true love and partner of his life who he remained with for twenty years until his death.

This was a very difficult book to read. Orson Welles was a genius in many ways but not in his personal relationships. Chris endured many things and they all affected her and her development. This memoir has a depressing tone throughout most of it but it was honest and believable. Still, her love for her father comes through and she certainly always wished the best for him as he apparently did for her. As this was really Chris' memoir, there is not much biographical information on many of the players. I think this book is most appropriate for someone who has already read an Orson Welles biography and for those curious about the pitfalls of being in a celebrity family.

Separating the too human man from the genius,
K


Support our site and buy In My Father's Shadow: A Daughter Remembers Orson Welles

on Amazon or find it at your local library. We received an ARC for review from the publisher.
Posted by Kristen M. at 12:10 AM