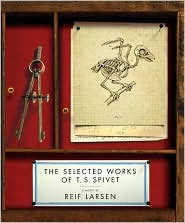 Another book that has been on my library TBR list for a long time is The Selected Works of T.S. Spivet by Reif Larsen. All I knew about this book was that it was about a cartographer kid and had a lot of sketches throughout. It is in fact a very complex story that is part travelogue and part memoir.

T.S. Spivet is a twelve-year old map-making genius who lives in Montana. His maps are not just the standard cities, roads and rivers. He maps emotions, sounds and activities as well. He also draws biological diagrams -- which have now gotten him noticed by the Smithsonian. Unaware of his age, they award him the Baird Award which comes with a one year fellowship position in Washington D.C. He feels unappreciated and unloved by his parents so he decides to take off and accept the position. He jumps a freight train and begins the next adventure in his short life -- mapping everything along the way.

I was really torn while reading this book. I wanted to love its quirkiness and some parts of it were interesting. I definitely got caught up in a side plot about T.S.'s great-great-grandmother, a geologist in a time when women were not accepted as scientists. Yet other parts dragged and just seemed to take lengthy detours into the mind of a very strange boy. There were also some bizarre conspiracy-type occurrences and some shocking violence that didn't endear this book to me. There will be some people who love the strangeness of the book but I wasn't totally on board with it. Overall, I think it's an interesting book that tries a little too hard to be different and therein becomes less than it could have been.


Support our site and buy The Selected Works of T. S. Spivet

on Amazon or find it at your local library. We borrowed our copy from the library.
Posted by Kristen M. at 12:12 AM