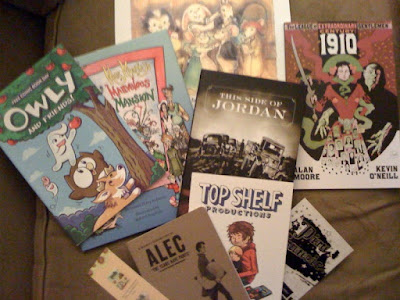 Last Sunday, the husband, Z and I went to the second day of the newly-reborn Seattle BookFest. It was held at the Columbia City Events Center which is actually a re-purposed old school. We had a fantastic time looking at all of the booths and books. There was definitely something for everyone and we brought home a nice little haul. (The picture is blurry because I am lazy and just took it on my iPhone.)

Z got his first signed and personalized book -- Mrs. Murphy's Marvelous Mansion by Emma Perry Roberts. We were lucky to show up right at the time that the illustrator, Robert Rogalski, arrived and we were able to get a drawing and signature. Z also got a print and bookmark from the Runt Farm series by the enthusiastic and quirky Amanda Lorenzo. Finally, he picked up a free comic from Top Shelf Productions that features their various children's comic book characters. It's very possible that we will end up with some of these adorable books at some point!

The husband also bought a comic from Top Shelf -- The League of Extraordinary Gentlemen - Century: 1910 by Alan Moore. I got a book -- This Side of Jordan by Monte Schulz, the son of Charles Schulz. It is published by Fantagraphics Books who also have a "Bookshop & Gallery" in Seattle which shares a space with Georgetown Records.

Then, after we browsed the fair, I had the great opportunity to spend a short time talking with some local book bloggers! I finally met Lena from Save Ophelia, Robin from A Fondness for Reading, Cecelia from Adventures of Cecelia Bedelia and met up again with J.T. from Bibliofreak. Robin posted a nice picture of our feet as some of us were being a bit camera shy (mine are the tan Simples). We talked for about an hour and promised to meet up again and also rope-in some other local bloggers. J.T. apparently got sick again from standing out in the cold so we will definitely plan something a bit warmer next time. Seattle in October is not outdoors time anymore.

Celebrating books with our neighbors,
K and Z (and T)
Posted by Kristen M. at 12:10 AM