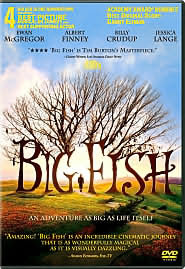 My first exposure to Big Fish was through the 2003 film. As I'm sure I've mentioned before, I'm a huge Tim Burton fan and my brother gave me a copy of the film as a gift. It is a very fanciful, bright film that follows a thirty-ish man, Will Bloom, who must deal with years of anger and resentment about his father's excessive storytelling and absenteeism during his youth. The father, Edward Bloom, is played as an old man by Albert Finney and a young man by Ewan McGregor. The film moves through the stories that Edward Bloom has told over his years, building a fanciful history that may only have a grain of truth in it. It is up to Will (Billy Crudup) to decide if the truth matters after all.

I've watched this film quite a few times over the years but didn't know until recently that it was based on Daniel Wallace's short novel. Seeing it mentioned a few times recently, I finally decided to get the book. It is also my first Wallace read.

The first thing I noticed is that this is a short book at 180 pages. The story is told mostly in brief scenes of Edward Bloom's life. There isn't the same dysfunctional relationship between Will and Edward as there is in the movie. It has more of the feeling of a son wanting to know his father better while he still has the chance. There's also less of the fanciful -- even though I would still classify it as magical realism. I really enjoyed the book and felt it took a satisfying voyage through the story.

Verdict: Treat these as different tellings of the same story and enjoy both.

Constructing the imaginary tales of my life,
K


Support our site and buy Big Fish: A Novel of Mythic Proportions

(the book) and Big Fish

(the DVD) on Amazon or find them at your local library. We own our copies of both.
Posted by Kristen M. at 12:16 AM