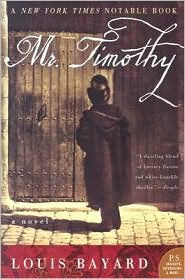 I received Louis Bayard's Mr. Timothy for Christmas last year and ended up saving it to read this year due to its holiday setting. This is the story of the adult Timothy Cratchit, a.k.a. "Tiny Tim" from Charles Dickens' A Christmas Carol. Things have changed for Tim -- his parents are both dead as are some of his siblings, he no longer has a cane and braces but only walks with a slight limp and, perhaps saddest of all, he turns out to have never been the pious, optimistic child that we saw through Dickens' eyes.

Timothy is homeless right after his father's funeral but ends up with a room in a brothel. He doesn't patronize the business but rather helps the madam learn to read. Things are relatively comfortable for Tim until one day when he sees a young girl dead in the street a few blocks from his home. As Tim passes by the scene, he notices a strange brand on her arm -- a G with demonic eyes in the middle. As he dredges the Thames with an old sailor friend, Gully, looking for bodies worth money to grieving families and medical colleges, they bring up another girl with the same brand and appearance. Eventually, Tim feels compelled to investigate and find out what is happening to these girls. Joined by a street urchin named Colin and a frightened young Italian girl named Philomela, Timothy works to rid London of a horrific evil and also to exorcise his own demons of guilt and self-doubt.

Published in 2003, this is Bayard's first historical mystery and while it didn't have the same polish as his others (The Pale Blue Eye starring a young Edgar Allan Poe and The Black Tower about the missing Dauphin in Paris), this book easily transported me back to Victorian London. There were characters like the kind-hearted and optimistic Gully who could have been penned by Dickens himself. My only real issue with this novel was my decision to read it at Christmas time. Though it is based on A Christmas Carol, it is a dark and sometimes gut-wrenching story that was difficult to read in a time of happiness. Still, i enjoyed it and Mr. Bayard remains one of my authors to follow.

on Amazon or find it at your local library. We bought our own copy.
Posted by Kristen M. at 11:12 AM