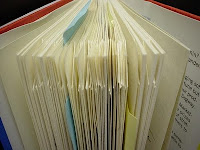 I'm not really sure how many Bookish Pet Peeves I have but I thought I would start this irregularly published feature for some fun ranting time.  Today's discussion -- "By the author of ..."

I don't have a problem with a lesser-known previous work by an author having this sort of labeling on the cover after the author has a bestseller.  It may inspire readers to pick up something in an author's back catalogue.  And of course future books by the same author or books continuing in the same series are fair game.  Yesterday, however, I encountered an instance when I found that I don't appreciate this labeling.  I went to start a book I have checked out from the library and it has "By the authors of ..." on the cover.  I panicked, thinking I had missed the first book in the series (since this is a pairing of two authors specifically for this series).  I quickly went online to look up the mentioned title only to find that it is the second book in the series that is mentioned on the cover of the first book in the series.  How exactly is that helpful?

Bookish Pet Peeve Number One:  Book covers that have a later book in the same series called out on the cover with a "By the author of ..."


Have you encountered this before?  Is this something that would bother you, my dear readers?