"It was bitter cold, the air electric with all that had not happened yet." 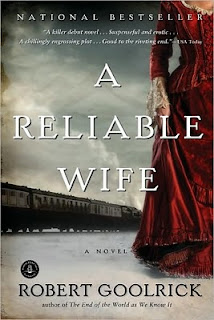 I almost quit reading A Reliable Wife after the first fifty pages or so. I thought the transitions between character stories were choppy and unbalanced and the backstory seemed repetitive. The characters weren't likable so I didn't really care what happened to them. I wasn't sure why Robert Goolrick's book was a bestseller at all -- and then I got caught up in the story and pushed through to the end.

Ralph Truitt is a wealthy Wisconsin businessman who is missing only one thing in his life -- a wife. He had one twenty years before but she died and Truitt never remarried. Now he feels the need for the closeness of marriage in his life so he places an ad in a major newspaper -- "Country businessman seeks reliable wife". Among the responses is one from Catherine Land which starts "I am a simple honest woman". Along with a homely photograph, Catherine's letters make her seem like the perfect choice for Truitt. He is disappointed then when she arrives and is not, in fact, homely but rather beautiful. He would be even more disappointed if he knew she had a small bottle of arsenic in her bag and plans to kill Truitt for his money.

I definitely think the writing improved as the book progressed which was why I was able to stick with it. The characters became more complex though I'm not sure I could say that they improved. Still, it was enough of a transition to make the book readable again. For me, the book was really redeemed only within the last few pages. I liked Goolrick's method of closure to this complex and dark story and my impression of the entire novel was raised in the final moments of reading.

But what really intrigued me was his one page tribute at the end of his story to a book called Wisconsin Death Trip by Michael Lesy. This book inspired Goolrick's story with its portrayal of the bleak and violent Wisconsin winters. This was the part of the novel that brought the sensational plot back down to Earth -- although to no Earth where I would want to live. Still, it is the specificity of the setting that really makes this an American Gothic tale. As you have probably noticed, I have very mixed feelings about this book so I will leave the decision to read it or not fully up to each of you!

Determined to live my life in sunshine,
K


Support our site and buy A Reliable Wife

on Amazon or find it at your local library. We received our copy unsolicited from the publisher.
Posted by Kristen M. at 12:19 AM