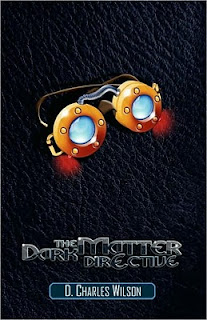 Some books have an optimal place and time for reading them. I can tell you that this new release, The Dark Matter Directive by D. Charles Wilson, should not be read while you are sitting alone in your car in a dark airport waiting lot on a rainy night. Though I was slightly traumatized by this bad choice, I couldn't close the book. The story is compelling and this is a good YA horror story.

I'm going to use the Amazon product description here because this is a complicated book that I'm having trouble summarizing!


When fourteen-year-old Eric Jessing wakes up one morning and finds the bathroom mirror has turned an endless black, he's clued in that things are about to get very interesting. A string of frightening and unexplainable occurrences follow that lead their dad, Matt, to feel his sons need protecting. After he ushers them out of the house, he calls a local psychic hoping for a sympathetic ear and a way to stop what seems like psychic phenomena. Unfortunately, what Matt learns is that his kids were born with a special gift: the ability to draw in and deflect dark spiritual energy like a pair of paranormal lightning rods. Worse, a particularly nasty entity called `The Red Horseman' has noticed, and sets out to absorb their ability. Directed to a renowned physicist and bookseller named Harker Jeffries, the boys learn that a secret society of children like themselves exist all over the world and have been at war with each other for thousands of years.


This book was originally intended to be the epitome of adult horror but then the author decided to take out the strong violence and reformulate it into a YA horror story. It is certainly successful as that with a real life or death situation for these brothers. One problem I had with the book though is that there were too many plot threads, too many directions, that were thin and could have been more fully developed. Some parts left me wanting a longer book but, honestly, this was about the length limit that I could stomach. I don't mind aliens and creatures and all sorts of other science-fiction darkness but I always have a problem when it comes to true evil. Yet this had enough of a mix of science and the supernatural for me to give it a chance and mostly enjoy it. Next time though I'm going to save a book like this for a sunny, summer day!

Moving back into the light,
K


Support our site and buy The Dark Matter Directive

on Amazon or find it at your local library. We received our copy from a publicist.
Posted by Kristen M. at 12:10 AM

Email ThisBlogThis!Share to TwitterShare to FacebookShare to Pinterest
Labels: fiction, horror, YA fiction