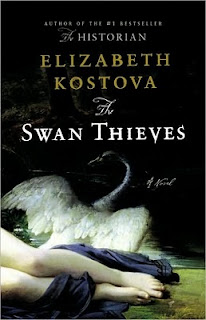 After loving The Historian a few years back, I couldn't wait for Elizabeth Kostova's next novel. Though it is about quite a different subject (Dracula versus Impressionist painters), I enjoyed The Swan Thieves as well. This is a novel with multiple narratives, one in the past and one in the present. While some other recent novels that used this technique have suffered from one weaker story, I felt that there was more of a balance of quality in this novel.

Andrew Marlow is a psychiatrist and amateur painter who has taken on a new patient as a favor to a friend. The man, semi-renowned painter Robert Oliver, was caught right as he was attacking an Impressionist canvas at the National Gallery of Art. Though Marlow's talent lies in getting people to talk, Oliver's decision to not speak a word foils his treatment. Instead, Marlow has to figure out for himself what events led up to Oliver's art-defiling outburst. Through interviews, research and a bit of luck, he not only reveals the demons haunting Robert Oliver but also solves a mystery from the past.

Told mainly through letters and interviews, I enjoyed the flow of this novel. I thought the story in the past was strong and touching. I haven't mentioned it in the summary because I think it is best experienced without any spoilers. All I will say is that it is the story of a female artist in late nineteenth century Paris. I thought the language and actions seemed authentic. I also thought the writing in the modern story was strong although some elements of the plot were not. It was hard to believe that a professional psychiatrist would realize that his actions were unhealthy and most likely unethical and yet continue with his choices. There was nothing he did that was terrible but I just found myself annoyed in a few places. Overall, though, I thought this was a good read but not as strong as The Historian. I will definitely be looking forward to Kostova's next novel and hoping that the wait is less than five years long this time!

Remembering to stop and stare at the canvases,
K


Support our site and buy The Swan Thieves

on Amazon or find it at your local library. We received a review copy from the publisher.
Posted by Kristen M. at 12:14 AM