The Book List Meme: Books That Should Be Made Into Movies 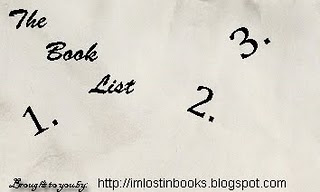 Having spent most of this month watching films for a challenge, some based on books, this feels especially pertinent.  Today we're coming up with Three Books That Should Be Made Into Movies ...


And one that I wish they would remake and actually follow the plot of the book is Inkheart by Cornelia Funke.
Willing to watch the movie but not promising to love it,
K
Posted by Kristen M. at 12:12 AM