"I suppose that if I were going to blame our involvement on anyone ..., I would be compelled to say that it was all Aunt Charlotte's fault." 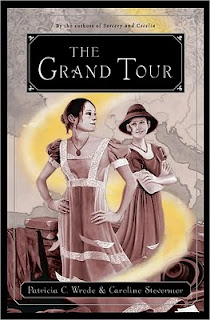 I'm sure you remember me gushing about Patricia C. Wrede and Caroline Stevermer's Sorcery and Cecelia a couple of weeks ago.  Well, I happened to see The Grand Tour the last time I was at the library and grabbed it so that I could continue on the journey with Kate and Cecelia.  I was warned in comments that this was not as good as the first so I went into it with lowered expectations.

This book was written in the same way as the last-- as a letter game --but this time as journal-type entries.  Kate is actually writing in a journal during her honeymoon and Cecelia's account is a report written after the fact but is interspersed throughout Kate's narrative.  The two young married women set off to the continent with their husbands and Kate's mother-in-law.  Almost as soon as they arrive, trouble comes to their doorstep and they soon find themselves waist-deep in some sort of magical villainy.  They are charged by the Duke of Wellington to discreetly investigate the situation and their task takes them from Paris to Venice and more.

My biggest problem with this book was that the journal entries and report excerpts are written under married names "Lady S" and "Mrs. T" (abbreviated to be less spoilery of the first book!) and they are unevenly divided so that I was constantly confused as to whom was writing.  This book took longer to read than it should have because I was constantly going back and forth to the section beginnings.  It would have been much easier if Victorian women were able to use their own names!  Also, I found Kate a bit more annoying than in the last book.  She was much stronger a month or so earlier.  Of course, she was newly married in this book so she might be excused a bit for deferring to her husband more than usual.  I hope she regains her confidence in the third book!

The story of this one was interesting and if it had just had a better flow, I think I would have really liked it.  One thing I enjoyed was that they took their close servants into their confidence and asked for their assistance in some cases -- especially when they proved more knowledgeable about some subjects than their employers.  It reminded me of Elizabeth Peters' Amelia Peabody books.  So, there was enough to interest me in this book that I will be reading the third one.  I have high hopes but realistic expectations for it, just as I did with this one.

Contemplating a grand European tour of my own,
K


Support our site and buy The Grand Tour

on Amazon or find it at your local library. We borrowed our copy from the library.
Posted by Kristen M. at 12:11 AM