New Release: They Found Him Dead 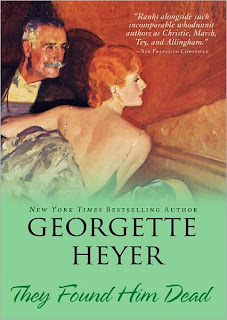 If you ever want to go into a mystery knowing exactly what the initial crime will be, look no further than Georgette Heyer and her awesome mystery titles!  With names like Behold, Here's Poison, Death in the Stocks and the newly re-released They Found Him Dead, you aren't too surprised at what you encounter.  What is surprising is the variety of characters, the plethora of false leads and the other crimes that happen throughout the rest of the novel.  These mysteries usually turn out to be anything but straight-forward.

In this book, we visit one of Heyer's favorite settings -- the English country home -- where a hodge-podge of relatives are gathered.  Inevitably, we find one of them dead -- this time the patriarch of the family, Silas Kane.  Though he seems to have died of natural causes, not everyone is satisfied that Silas was not maliciously cut down before his time.  When other events happen, it becomes obvious that someone has it out for Kane and his heirs.

I thought this was a good mystery but there was one character that I loved which really made the book for me.  Mr. Harte is a fourteen year old boy who is obsessed with American gangster films and regularly attempts to use the vernacular and tones of these films.  He is spunky and bright and, at the same time, whiny and petulant.  In short, he's fourteen!  His character was a breath of fresh air and I wish there was a follow-up novel of his character.  Beyond Harte, this is a typical Heyer mystery with a fairly obvious suspect that you still can't be sure of until the very end.

Finding a good mystery between the pages,
K


Support our site and buy They Found Him Dead

on Amazon or find it at your local library. We received our copy from the publisher.
Posted by Kristen M. at 12:06 AM