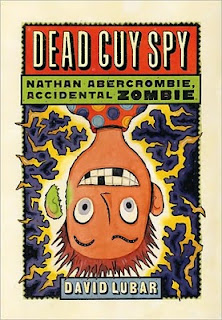 Last fall I reviewed the first of David Lubar's Nathan Abercrombie, Accidental Zombie series, My Rotten Life. I thought it was cute and was hoping that it was the start to a strong series. In January, the second book of the series, Dead Spy Guy, was released and, if anything, I liked it more than the first one!

This book picks up shortly after the first one leaves off.  Nathan Abercrombie is a zombie and only two of his friends know his secret.  At least, that's what he thinks until he notices that he is being followed (rather shabbily) by a man in a shrub costume and an electronic squirrel. When the man finally contacts him, he reveals that he is head of B.U.M., The Bureau of Useful Misadventures.  The man wants to recruit Nathan to use his special skills to help the world.  But can Nathan trust this man -- especially when he offers a partial cure to Nathan's woes?

This is a really fun book.  I found myself chuckling in a few places and laughing a bit too loudly at 2 am during one of the final scenes.  I love the direction that the book takes and that it deals with some of the everyday challenges that Nathan faces with his "condition".  He has his same personality but he doesn't need to sleep or eat and he has to be careful with his slowly deteriorating body.  I also like the way that friendships and school kid alliances are portrayed in the books.  This story has depth despite its light-hearted topic.  I have recommended this series to Z's school librarian and she is going to purchase the books for his school.

Rooting for Nathan despite his being a zombie,
K

on Amazon or find it at your local library. We received an advanced reading copy from the publisher.
Posted by Kristen M. at 12:07 AM