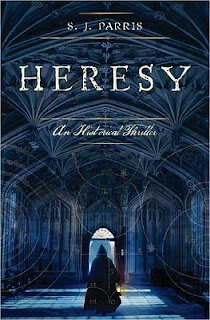 Heresy by S.J. Parris is a historical fiction set in sixteenth century Oxford.  It's an easily read mystery with a wealth of details about the plight of Catholics in Elizabethan England.

The novel follows Italian ex-monk Giordano Bruno as he runs from the Inquisition straight into an even more dangerous situation in England.  After being recruited as a spy by Sir Francis Walsingham, he heads to Oxford where he is immediately attacked for his Papist past.  Words are not the only means of attack in this college though.  During his first night there, he is woken by the screams of a man who is being attacked by a vicious dog in a locked courtyard.  After the man dies, Bruno is shocked that the Rector tries to explain it away as an accident even though the conditions are such that it was obviously murder.  After Bruno starts his own minor investigation into the murdered man's life, things in Lincoln College only get worse and it is up to Bruno to figure out who is being targeted and why.

This was an average novel.  There was nothing exceptional about it but at the same time I have no real complaints.  If this is a genre that you enjoy, you will probably want to read this book.  The descriptions of torture are vivid and the religious complexities of the newly Protestant England are well expressed.  Giordano Bruno was a real historical figure and, if the author makes this a series, we will have few years left with Bruno as he was imprisoned for seven years and then burned at the stake for heresy in 1600 -- only 17 years after his visit to Oxford.


Support our site and buy Heresy

on Amazon or find it at your local library. We received an advance review copy from the publisher.
Posted by Kristen M. at 12:16 AM