It's the first day of spring in the Northern Hemisphere!  Yay!  I still haven't uploaded my neighborhood bloom pics but it looks like I'm going to be able to get many more this weekend because the sun is shining and the days are longer.

The U.S. is finally getting in on the children's books in cereal boxes racket thanks to Cheerios.  Jacket Copy doesn't give a date for when this will start but the books are by first-time authors and they are chosen through a contest.

io9 says that there is going to be a new A Wrinkle in Time movie.  That's good news because the first one was rather bad.

If you haven't heard of The 826 Project yet (and I hadn't), check it out.  It's a youth (ages six to eighteen) creative writing program that is funded by some pretty unique shops.  Just looking at the classes offered by the local Seattle chapter is inspiring.  (via Pages to type before I sleep ...)

Are you an Etsy browser or shopper?  PicClick looks like an awesome way to navigate quickly through Etsy items.  I like that it has prices right there up front.  (via Apartment Therapy)

If you are a luxury camper or an emergency preparedness nut, this Camp Chef Camping Outdoor Oven with 2 Burner Camping Stove

might be the most awesome thing you could own.  Can you imagine some fresh warm muffins when the power is out?  (via Apartment Therapy)

Atlas Obscura is one of my favorite new sites and the other day they featured a rabbit carving that may have influenced a young Charles Dodgson to write about a certain white rabbit.  What do you think?

Rob of RobAround Books has a Bookshelf of the Week feature and this week's photo from Joseph del Pesco is unique -- a hollow tree structure on the streets of Berlin with books inside. 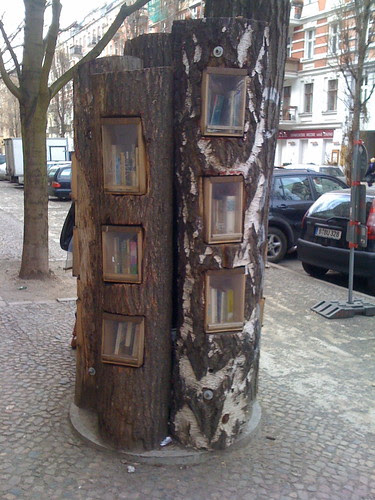 And finally, I really hope that you consider tuning in to the Discovery Channel for their follow up series to Planet Earth -- Life.  Techland sings its praises and the first two episodes air on Sunday.  (And yes, it's narrated by Oprah.)

Thinking of re-starting my zoology career,
K
Posted by Kristen M. at 12:22 AM