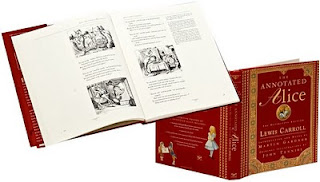 For Z's read-a-thon month, we've been focusing on some longer books.  Even though he may not understand everything, he's been a good listener and I've tried my best to do some good voices as I read.  One of our most adventurous reads so far was the original Alice's Adventures in Wonderland.  Z is quite familiar with the Disney film version and so he was willing to listen to this story and even read some of his favorite parts himself (like the crocodile poem).

At first he was a bit daunted because the only copy I own is the beautiful The Annotated Alice.  He said it was too long, especially when he thought we had to read the annotations on the side of the pages.  But when he realized that it was just the center column text and that it had the original Tenniel illustrations, he was excited to dive into the story.  We made it through with only a few bored moments (the story of the unfortunate Mock Turtle is a bit abstract for a five year old) and I think it was a great experience for Z to be exposed to the different language and ideas.  I'm not sure what he took away from it except that, for a couple of days, everything was "nonsense"!  He says that he wants me to read Alice's Adventures Through the Looking Glass to him sometime soon. 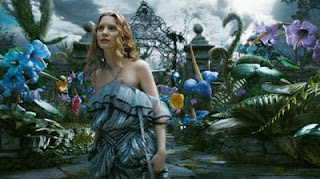 As a reward for sitting through a difficult book, we then went to a 3D showing of Tim Burton's Alice in Wonderland.  We both really enjoyed the movie although I would have probably done better with the 2D version because my eyes didn't adapt well.

If you don't know the premise of this new movie, Alice has grown up having vivid dreams of a place called Wonderland that she believes exists only in her head.  Now she is of age and she is attending her engagement party.  She starts to question the life she is being forced to lead and sees the white rabbit running through the shrubbery.  He beckons to her and she follows, only to fall down the rabbit hole once more.  When she arrives, she is told that they have been waiting for "the Alice" to return -- to slay the Jabberwocky on the Frabjous Day.  But until she believes in Wonderland (actually Underland) and herself, she can't succeed.

This film mixed elements from both Alice books and also the original Disney movie in an interesting way.  There were some intense chase and fight scenes but Z wasn't scared.  He was much more frightened by the Other Mother in Coraline.  The visuals were up to Burton standards and the acting was superb for the most part.

Verdict: The movie takes elements of the books but weaves its own story.  The book is, of course, a must read and the movie is beautiful and unique but, since they aren't the same story, you really can't compare them.  Choose whichever one you are interested in and both if you love Alice.

Following the white rabbit,
K and Z
Posted by Kristen M. at 12:03 AM