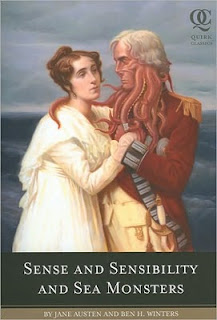 So I'm sure you remember my recent post about being less than thrilled with the characters in Jane Austen's Sense and Sensibility.  And yet, I had committed to read the spoof, Sense and Sensibility and Sea Monsters, for the Take Another Chance Challenge.  It's for Challenge 8: Real and Inspired.

I'm not exactly sure that this would count as paying homage but it's certainly inspired by the original!  In fact, Jane Austen is listed as one of the two authors (Ben H. Winters is the other) because almost the entire text of Sense and Sensibility is in this book.  It just has a bit more added in -- that happens to be about pirate ships and sea shanties and malaria!

I think that the dedication at the beginning of the book really gave a clue as to what the book would be like.


This book is dedicated to my parents --

The word silly is one that came to mind quite often while reading this book.  I definitely laughed out loud in a few spots and chuckled quietly in a few others.   The marriage of the new and old texts is smoother in some spots than others but overall it actually works.  The only thing I didn't like was that Winters made Brandon into, well, the man you see on the cover of the book with tentacles on his face (due to the curse of a sea witch).  All through the book, other characters were repulsed by his looks and I thought it was a bit harsh.  Of course, Colonel Brandon was possibly my favorite character in the original so I'm sure that influenced my feelings on this!

I'm not going to go into the plot of this story because, well, it's just Sense and Sensibility ... with sea monsters -- giant octopi, a man-sized jellyfish, killer narwhals, evil lobsters and much more.  Willoughby is a treasure hunter, Edward wants to be a lighthouse keeper and Elinor's favorite pasttime is whittling driftwood figurines.  If you appreciate silly humor and don't mind the idea of a recooked classic, you should probably give this book a shot!


Support our site and buy Sense and Sensibility and Sea Monsters

on Amazon or find it at your local library. We got our copy from a publicist.
Posted by Kristen M. at 12:14 AM