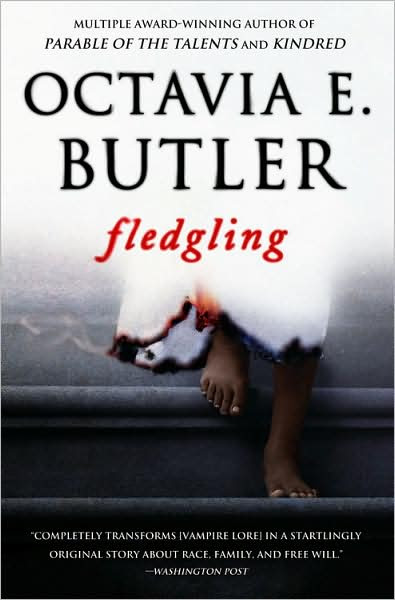 The final read in this round of the NTTVBG was chosen by Kim of Reading Matters and was Octavia Butler's Fledgling.  All I knew going in was that it was a vampire book.  I decided to read it since I've been curious about Butler for a few years but hadn't picked up any of her books on my own.  She was considered a master of her genre and something of an anomaly in the science fiction/fantasy world because she was an African-American woman.  This was a very interesting choice for this particular book group and I'm interested to join in the discussion with everyone today.

Briefly, this is the story of a young member of a vampiric race, the Ina, that co-exists with humans.  They do not change anyone into vampires when they bite them but, instead, give pleasure to humans with their bites and become attached to them in a symbiotic relationship.  This young Ina has survived an attack on her colony but has lost her memory of anything before the attack.  She must re-learn what it means to be Ina, how to interact with her symbionts and why she is unique among her people.  Her exploration gains a sense of urgency as she realizes that her family was targeted because of her existence and many more will die if she doesn't find out why she is so strongly disliked.

Though this isn't my sort of story, I got through it.  The most distracting thing was the ridiculous number of typos in my version of the book.  The most compelling parts were the politics of this supposedly advanced race and how they still have some weaknesses similar to humans.  The symbiont/Ina relationships were strange and I was creeped out by the eroticism/violence connection -- but then again, that's what you expect with a true vampire story.  I'm not sure if I will explore this author more but supposedly her other novels are quite different from this one except for the similar discussions about race and gender issues.

Moving on to something lighter with less bloodsucking,
K


Support our site and buy Fledgling