"Last November I had a nightmare." 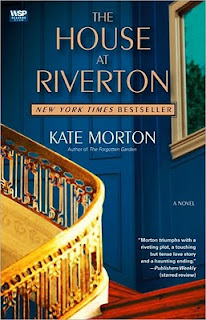 Continuing with my recent unwitting focus on wartime England, I recently picked up Kate Morton's The House at Riverton.  Told from the point of view of Grace Bradley, an old woman at the end of her long and fruitful life, we learn the story of Riverton House and the grandchildren who regularly came to visit.  Grace begins service in the house at the age of fourteen -- the same age as the middle child, Hannah Hartford.  Hannah's close relationship with her younger sister, Emmeline, and older brother, David, is something that Grace envies.  However, the delicate triangle is put off-balance when David brings a friend, Robbie, home from school with him -- a boy who has a strange effect on the girls.  Shortly after, the First World War breaks out and David and Robbie leave along with many of the other men.  Few of them come back and those that do are damaged -- victims of their own mental battles.  The women are also forced into a new and evolving world of independence that doesn't always mesh with the world of obligation that they grew up in.  As Grace reveals the intertwined stories of many people, we find ourselves in the midst of both heartbreaking tragedy and also true love.

One of the things I dislike about many Victorian novels is their portrayal of the serving class.  This novel was definitely an exception with a decent and normal life "below stairs".  Grace was an engaging narrator although a bit disturbing in her brief dismissal of each death that occurs throughout her story.  Most were presented with a single sentence and little emotion.  I couldn't tell if this was on purpose because the narrator herself is close to death and doesn't want to dwell or if this was a hangup for the author.  Another small disappointment for me was that this book was set up as a mystery and yet so much of it was obvious from early on.  There was one major reveal that should have been life-changing that was given barely any weight and no follow-up at all.  It was a bit unsettling.  Overall, though, I did enjoy this book and will certainly be reading Morton's second book, The Forgotten Garden, which I thought was a sequel of sorts but appears to be its own story.

Recognizing that everything should and does change,
K


Support our site and buy The House at Riverton