"I, Sam Pulsifer, am the man who accidentally burned down the Emily Dickinson House ..." 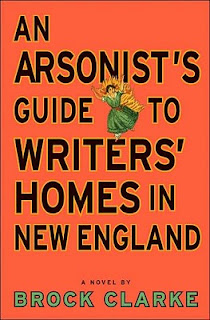 Sometimes I think the worst thing I can say about a book is that I don't really want to write up a post about it.  That's the case with Brock Clarke's  novel An Arsonist's Guide to Writers' Homes in New England.  It's an unwieldy title for an unwieldy book and it left me feeling annoyed and disappointed.

The basic premise is that Sam Pulsifer accidentally burned down the Emily Dickinson house when he was a teenager and that there happened to be two people inside at the time that perished in the fire.  Sam is found guilty of arson and murder and when he comes out ten years later, he doesn't even feel welcome in his own home.  He goes off for years and becomes entrenched in a new life but then pieces of his almost-forgotten past come back to disturb the relative peace he's found.

I didn't really have too much of a problem with the plot of the book -- just a few little things.  My main problem was with Sam.  I really, really didn't like him.  Terrible things keep happening to him but he's too stupid to do anything about them or even to fully care.  He's Forrest Gump without being lovable or sincere.  And his parents?  Awful.  His wife and her parents?  Don't get me started.  The other random characters splattered throughout the tale?  Blah.  I was so frustrated that I looked at other reviews on LibraryThing while I was reading the book (something that I never do) and found my same thoughts in many of the reviews.

HOWEVER (in caps because it's a big however), I think that there are definitely readers who will like this book (see this review or this one).  I'm just not one of them.  Neither is Trish.  So, if you have this one in your TBR pile or are considering it, I strongly suggest reading a few reviews and deciding if the complaints that are made are dealbreakers for you or not.  As the husband said, "well, I thought it had a good title ..."

Watching it all burn to the ground,
K


Support our site and buy An Arsonist's Guide to Writers' Homes in New England on Amazon or find it at your local library.  We bought our own copy.
Posted by Kristen M. at 12:07 AM