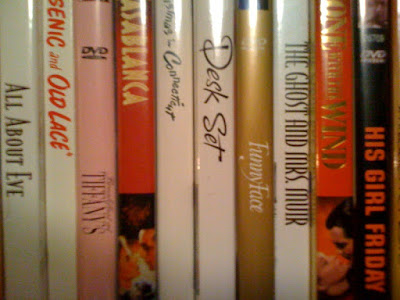 It's likely that you've realized that I have a bit of a thing for classic movies.  The other night, as I lay in bed watching a favorite (Laura), I found myself wondering if it was based on a book.  And then that expanded a bit to wondering how many of my favorite classic movies are based on books or plays that I haven't read.  And, of course, I was still thinking about Simon T.'s recent post asking if anyone reads plays.  So, the next morning, I made a list of book/movie pairings and was glad to see that I have read quite a few of the original works that my favorite films are based on.  Here are the ones that I've already read --

And yet, there are still so many stories that I love that I've only seen in film form.  So my ongoing challenge for myself will be to fill in this list by reading the novels or plays that were adapted into films.  This is something that I could do for all films but I'm just going to start with the "classic" films from the 1930s through the 1950s.  Here is the list I came up with the other day which I may add to as things come to mind.

Some of these will be written as book reviews and some as Book v. Movie posts so stay tuned!  If you have any suggestions for other fantastic pairs, please let me know.  Also, if anyone else has an interest in this, let me know and I might make a button up and make this an actual challenge.  I think this will be a fun project regardless!