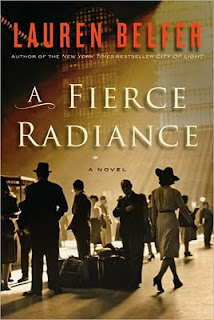 There seems to be no shortage of books set in World War II these days.  And yet each one manages to explore and expose the conflict from a different perspective.  Lauren Belfer's A Fierce Radiance is set in New York City and touches on a variety of issues -- the role of photographers in a time of tragedy, the changing roles of women, the difficulties of parenting during wartime and the development of antibiotic drugs, just to name a few.  Each is presented in a bleak but honest light and one cannot help but want to explore many of these issues in a deeper way after finishing this strong novel.

The main character of the book is Claire Shipley, a staff photographer with Life magazine.  She is a single mother, living on her own in New York City.  When she is asked to follow the story of a patient at the Rockefeller Institute who is one of a few penicillin trial patients, the story hits a deep chord for her.  She lost her own daughter to an infection almost eight years earlier and this is a drug that would have saved her life -- and if successful will indeed save the lives of millions around the world.  However, when her story is not printed, she questions why and finds out that the government has taken over the penicillin project for the war effort.  Eventually she becomes deeply involved in the penicillin web -- through ties of love, blood and patriotism.

Moving smoothly between plot lines of science, romance, business and espionage, this novel takes the reader on an emotional journey through the trials of Americans during the war.  There are the boys sent off to fight and the families left at home.  There are the women left to work and make do with what they can gather despite rationing.  There are the scientists who are trying to save lives while under the constraints of a government that is currently in the business of ending them.  When this all comes together, it is a rich story that leaves one with the obvious conclusion that there are very few lives that are left untouched by war.  There are very few who are not forced to confront demons -- either within or without.  This is a powerful narrative that succeeds in providing a glimpse into these lives.

Seeing everything now in shades of grey,
K


Support our site and buy A Fierce Radiance

on Amazon or find it at your local library.  We received an advanced review copy from a publicist.
Posted by Kristen M. at 12:06 AM