"Lady Winwood, being denied, the morning caller inquired with some anxiety for Miss Winwood ..." 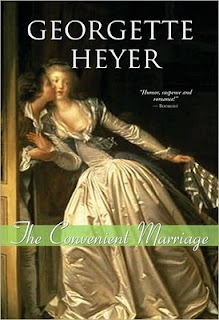 Since it had been a while since I last read a Georgette Heyer romance, I picked up another one recently -- The Convenient Marriage

.  It was an entertaining plot with just a couple minor flaws -- including an unlikeable main character.

Seventeen year old Horatia Winwood is the youngest of the three Winwood daughters.  Her oldest sister is in love with a lowly military man so when she is proposed to by the extremely wealthy Lord Rule, she doesn't know what to do.  Horatia has an idea though -- to "sacrifice" herself and marry Rule.  She approaches him and for some unknown reason he accepts.  This doesn't sit well though with Rule's mistress who secretly wanted him to propose to her or his nephew who stands to inherit if Rule remains unmarried.  They (and others) conspire to destroy the marriage but all of their efforts may be unnecessary as Horatia seems bent on sabotaging her own happiness.

What I did like about this novel was the comedy of errors plot line.  Horatia's brother, Lord Winwood, and his friends are hilarious.  Sometimes things seemed a little too far-fetched and coincidental but in the context of a light romance, I didn't mind.  Lord Rule is charming, collected and intelligent.  The downfall of this novel though was Horatia.  The stammering brat never deserved anything she got -- and certainly not a husband as caring as Rule.  She wasted his money without a second thought, flirted with any guy around and lied constantly.  I have no idea why Rule thought she was worth fighting for.  Luckily, though, the fun plot was enough to outweigh the annoying character for me and I might read this again sometime.

Have you read this Heyer romance?  Did you like Horatia?

Holding off on buying the diamond-studded slippers,
K


Support our site and buy The Convenient Marriage