New Release: Lady of the Butterflies 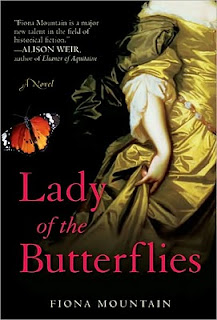 One of my favorite subjects for a novel is a little-known historical character.  We all know about Darwin and Dickens and Lincoln, but science and politics and literature are built on much more than just the backs of a few geniuses.  In Lady of the Butterflies

, Fiona Mountain brings to life Eleanor Glanville, a woman whose innate interest in natural history led to many of the joys of her life but also the sorrows.

Eleanor was mostly raised by her father, a staunch Puritan, to be modest and chaste but also to appreciate learning and to love nature.  Unfortunately, after her father's early death, Eleanor is left without guidance and, while indulging her passions, finds herself in many unfortunate situations.  Still, through her curiosity and love for butterflies, she finds the peace and fulfillment she seeks.

There were many things to like about this novel.  The seventeenth-century fens and wetlands are almost their own character -- so much so that I found myself frequently drawing parallels to today's conservationist and restorationist ideas.  And I always appreciate the study of early women scientists and the hurdles that they faced in pursuing their interests in a male-only profession.  And yet, parts of this book rubbed me the wrong way.  Without giving anything away, I can only say that I have a problem when fictional scientists (especially females) are portrayed as cold-hearted and incapable of truly caring about their families (if they are even given one by the author!) because of their scientific pursuits.  There is a plot element that diverges from Eleanor Glanville's actual history (yes, I looked it up) that ruined her character for me entirely.  In fact, I felt that there might have been too many liberties taken with this actual historical character just to make an intriguing story.  I'm not sure why authors can't just write stories with characters that are based on an historical figure instead of changing actual facts to fit a plot line.  An afterword with a brief description of the actual person the story was based on would be much more satisfying to me than finding out at the end of a book (or part way through) that the author took excessive liberties with real people's lives.

I didn't mean that to turn into a rant but this has been something I've been thinking about for days after finishing this novel.  But don't let my issues deter you from picking this one up.  I really did enjoy the story.  It is strong on romance and the history is very accessible which made it a good summer read.  It also led me to a bit of historical research which is never a bad thing!


Support our site and buy Lady of the Butterflies

on Amazon or find it at your local library.  We received a galley for review from the publisher.
Posted by Kristen M. at 12:05 AM