I haven't done a picture book post lately but rest assured that Z hasn't moved on from these wonderful stories yet!  Here are three I just pulled from his library pile (quite a big one for summer) that are all about friendship. 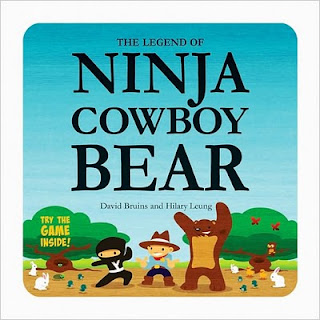 The first was one we couldn't pass up -- The Legend of Ninja Cowboy Bear by David Bruins and Hilary Leung.  Besides the appealingly unpunctuated title and the awesome artwork, this is a cute tale of individual differences making friendships stronger.

The ninja, cowboy and bear are friends who start to become competitive.  Each thinks his own unique skills make him the "best" and they set up tasks against each other to prove their strengths.  Once they have all won once and there is no obvious champion, they all go off to brood.  But, thankfully, they each come to the conclusion that their differences are their true strengths and they return to be friends again.

The game mentioned on the cover is itself called "Ninja Cowboy Bear" and is explained on their website and in the back of the book.  It's similar to Rock Paper Scissors but you make your move with your whole body -- in the cowboy, ninja or bear stance.  The tasks in the book set up the dominance patterns for the game.  Z and I are going to have to practice but I have a suspicion that he's going to just be a ninja every time.  He's in his kung-fu phase right now! 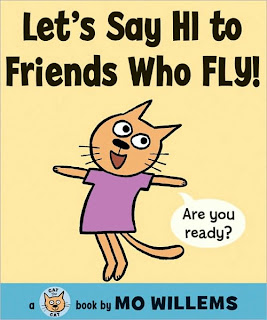 Mo Willems has a new series for the youngest readers -- the Cat the Cat books.  This one, Let's Say Hi to Friends Who Fly!

, is a simple narrative about how your friends can surprise you.

Cat the Cat goes around to her friends who can fly--Bee the Bee, Bird the Bird and Bat the Bat--and cheers them on while they display their talents.  But when the friends see Rhino the Rhino, they become embarrassed because he can't join in their game.  Or can he?  When he comes back in an airplane, he surprises and delights them all.

This is an even simpler series than the Elephant and Piggie easy readers.  The words are very repetitious and great for learning.  And, of course, the book has Mo Willems' trademark enthusiasm in it.  Even though it's far too simple for him, I have caught Z sitting with it many times.  I guess you can never be too old for enjoying Mo! 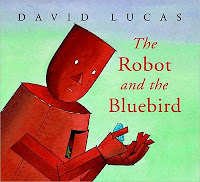 Finally, we have a bittersweet book from David Lucas -- The Robot and the Bluebird

.  The Robot, living in a community of robots, has a broken heart.  We don't know how it happened but the compartment in his chest where his heart had been is empty.  He is sent to the scrap heap and sits lonely for season upon season.  But one wintery day, a lost bluebird comes into sight.  She isn't sure she will survive because she is so very cold and tired.  The Robot offers the hole where his heart had been as a place for the bird to rest.  When the bird admits to being too weak to continue its migration, the Robot begins walking and takes the bird all the way to the sunshine.  This effort takes every bit of his remaining energy and when he reaches to the sky to release the bird, he stops moving forever.

Z hasn't read this one and I'm not sure if he's ready for it.  I just read it for the second time and tears still came to my eyes.  Then again, it might be a good way to introduce death in a way that provides hope.  The Robot becomes a home and perch for many birds and is remembered fondly.  Still, it's heartbreaking.  But if you are looking for this sort of tale for a youngster, you couldn't do better than this one.

Appreciating friendship with all of its ups and downs,
K and Z


Support our site and buy The Legend of Ninja Cowboy Bear

, Let's Say Hi to Friends Who Fly! and

The Robot and the Bluebird

on Amazon or find them at your local library.  We borrowed all of these from the library.
Posted by Kristen M. at 12:14 AM