"Finn had been flung on his face and chained to the stone slabs of the transitway."

I've been following Lenore's Dystopian August (which is awesome, by the way!) and decided to participate at the last minute.  I scored an ARC of Sapphique

by Catherine Fisher (due for release at the end of December) and it happens to be the sequel to a YA dystopian novel.  The first book is Incarceron

and I borrowed it to read during our vacation. 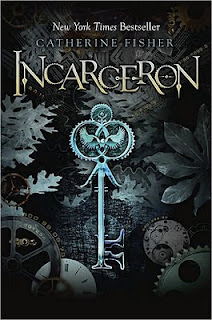 First, let me admit that I've always thought that dystopians weren't my thing.  It's not that I don't think that they're good books but I tend to think of them as bleak and depressing.  However, Lenore's focus on the genre has helped me pick out the ones that are the right fit for my reading tastes.  In her last dystopian feature month, it was Jasper Fforde's Shades of Grey

.  And now, after choosing Incarceron, I think that my niche is the fantasy dystopia.  It's not as bleak if it's not your own world that has gone to seed!

Almost two hundred years ago, the people of this society took all of their criminal and antisocial members and put them together in an enclosed prison that has an artificial intelligence.  The prison was meant to direct the inmates into reformation and the creation of a utopia.  Not surprisingly, something went wrong and the prison turned into a hell of warring tribes and limited resources, all managed by a dissatisfied AI.  Finn is the member of one of these tribes but isn't quite like the other inmates.  He has no memory before three years ago and thinks he may have come from the outside world.  Claudia is in the outside world and is about to be married off to someone she detests.  Her father is the warden of Incarceron and she believes that unlocking its secrets will free her to live a different life.

This was a very compelling story.  I still found it a bit depressing but the world was also fascinating and I can't wait to learn more about it in Sapphique.  There are pretty intense issues of loyalty, trust and survival ethics in this book and I can only imagine that they will get more hairy in the next part of the story.  Lenore told me that it goes in more of a high fantasy direction which I wouldn't have seen coming so I'm intrigued!

Returning to my happy place,
K


Support our site and buy Incarceron

on Amazon or find it at your local library.  We borrowed our copy from the library.
Posted by Kristen M. at 12:14 AM