"Polly sighed and laid her book face down on her bed." 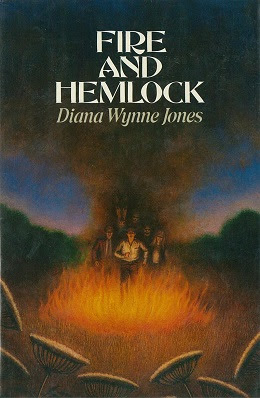 Fire and Hemlock is Diana Wynne Jones' modern retelling of the Scottish ballad of Tam Lin, a story of fairies, trickery and love.  Polly is a college student who is slowly regaining memories about a part of her life that was completely forgotten.  The thing is that she has alternate memories of events for the same time period, which implies that the other memories were taken from her forcefully.  As Polly remembers, she discovers that she might have been responsible for ending a unique friendship and losing something precious to her.  And the answer seems to lie in the photograph she has on her bedroom wall of fire and hemlock.

I know that is a bit short of a description and not very telling but part of the joy of this book was in having no idea where it was going, even into the last few pages.  As one of Diana Wynne Jones' longer novels, this is also one of the most complex and some things are left to the reader to decipher and imagine.  Polly is a strong but flawed character, even in the beginning as a ten year old girl.  Many of the other characters are adults and they are anything but one-dimensional.  In fact, this might be the first Diana Wynne Jones novel that I felt wasn't entirely appropriate for a younger audience.  With a bit of violence and a lot of emotional turmoil, I would designate it a young adult and older read for sure.

This is definitely one of my favorites and the list lengthens of DWJ books that I would recommend!

Never underestimate the power of a good story,
K


Find a used copy of Fire and Hemlock or borrow it from your local library as we did.  It is sadly out of print at the moment.
Posted by Kristen M. at 12:11 AM