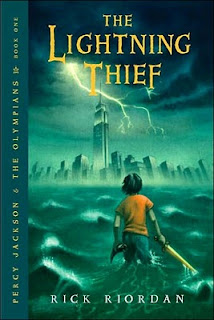 I'm finding it impossible to think of any other way to write this post than as a big fat rant.  I'm sure any of you that have read the book and seen the film will agree.  Rick Riordan's The Lightning Thief

, first book in the Percy Jackson & The Olympians series, is smart and fun and a great read.  The film is complete crap.

If you aren't familiar with the series, Percy Jackson is a boy who has had trouble all his life with a learning disorder, a loser of a stepfather and just general problems of not fitting in.  One day, when a teacher turns on him and reveals herself to be a monster, Percy's life is changed forever.  He begins a quest to find his true nature and to reestablish peace between gods that he thought never existed.  This is a great series for introducing kids to Greek mythology and for showing them how their weaknesses may actually be strengths.  There are a wide variety of strong characters and some smart action.  I enjoyed the way the story unfolded and I'm sure I will be continuing with this series and even picking up Riordan's new Egyptian mythology series as well.

The writers of the screenplay for the Percy Jackson film apparently didn't enjoy the book as much as I did, though, because they decided to change almost every single thing in it.  A wonderful scene when Percy fights the dastardly teacher with the help of an unlikely weapon?  Gone.  A rival at the camp he attends that inadvertently gives him the clue to his heritage?  Not in this film.  A god whose actions were the basis for the entire book?  Not there either.  Almost every character was changed in the film and not a single one for the better.  Percy was more of an ass and his friends, instead of being unique individuals, became boring and stereotypical.  Almost every scene in the book was changed or deleted and the kids used their swords instead of their brains.  For anyone who thought that the minor changes to the Harry Potter films were inexcusable, you wouldn't be able to stomach this for even the first few minutes.  If I hadn't been planning to post about this film, I would have turned it off then as well.

Verdict: Grab this book if you're at all interested in the premise.  You might be pleasantly surprised at how engaging it is.  And, for the love of Zeus, avoid the movie.  I don't think I would have even liked it much if I hadn't read the book.

(And if you're wondering, I'm counting this as an RIP read due to an awesome trip to the underworld, a good deal of peril and a few encounters with some truly frightening creatures.)

Petitioning for a "very loosely-based on" label,
K


Support our site and buy The Percy Jackson and the Olympians, Book One: Lightning Thief Deluxe Edition

on Amazon or find it at your local library.  We borrowed our copy from the library but will probably buy the set for Z's shelves.
Posted by Kristen M. at 12:13 AM