New-ish Release: The Case of the Man Who Died Laughing 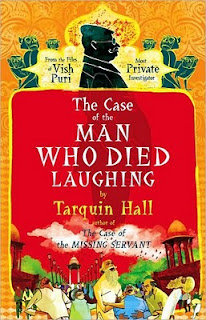 You may remember in April when I reviewed the first Vish Puri detective novel, The Case of the Missing Servant.  I really liked it for its original setting (Delhi) and charismatic lead character.  The second in the series, The Case of the Man Who Died Laughing

, was released this past summer and I was slightly less impressed, mostly because Tarquin Hall already seems to have fallen into a pattern and this is only the second novel in the series.  The following things happen in both novels --

1. Vish Puri eats a lot.
2. Vish's mother (widow of an intelligence agent) solves her own case.
3. One of Vish's employees (the same one both times) goes undercover and almost loses their life.

I'm not going to write a full review of this book because I think that the plot itself is somewhat irrelevant.  If you are looking for a mystery that has a unique setting and a glossary of fun Hindi words in the back, pick up one of these novels.  If you like it, pick up the other one a year or so later so that the similarities won't be so obvious.  I'm hoping that Hall switches things up a bit in the third novel because I really do like visiting India, meeting such fun characters and experiencing a culture so incredibly different from my own.

Pulling for something original,
K


Support our site and buy The Case of the Missing Servant

and The Case of the Man Who Died Laughing: From the Files of Vish Puri, Most Private Investigator

on Amazon or find them at your local library.  We bought our copies of the books.
Posted by Kristen M. at 12:02 AM