Last month, we recorded a cute little animated television special called The Gruffalo.  Z watched it quite often and thought it was great.  Then I accidentally deleted it from the DVR.  After a bit of panicking when I found that it was not available on DVD, I realized that it was just an animation straight from a picture book -- The Gruffalo

, written by Julia Donaldson and illustrated by Axel Scheffler.  Of course we quickly put a hold on the book at the library and decided to grab the sequel, The Gruffalo's Child

, as well.  And while I was looking for The Gruffalo, I came across another title by Donaldson/Scheffler that I thought Z would love, The Snail and the Whale

.  He ended up getting that one for Christmas from his aunt and uncle!  So now we had three books in the house that Z was reading all of the time and so on our last library trip we couldn't resist grabbing two more books by this author/illustrator duo -- Charlie Cook's Favorite Book

and The Fish Who Cried Wolf

.  All written in verse, these stories present such great topics as self-esteem, quick thinking, literacy and honesty.

The Gruffalo is the story of a little mouse who goes walking through the woods one day.  He is soon approached by a fox who wants to eat him.  He thinks quickly and says that he is on his way to meet a gruffalo, a scary creature with terrible claws, teeth and tusks whose favorite food is "roasted fox".  The terrified fox heads for the hills and the mouse continues on his way.  His ruse saves him from an owl and a snake as well and he feels confident in his intelligence until he runs into the very creature that he thought he had invented -- a gruffalo!  The mouse is going to have to think of something quick to avoid being eaten by the gruffalo.

The verse in this book is great for reading aloud and there's an element of suspense which most children love.  The illustrations are fantastic as well.

The Gruffalo's Child stars the daughter of the gruffalo who has been told the story of the scary mouse by her parent.  One night, she decides to set out and track down this mouse.  She also comes across the snake, owl and fox before finding the mouse.  How will the mouse keep from getting eaten by this new gruffalo? 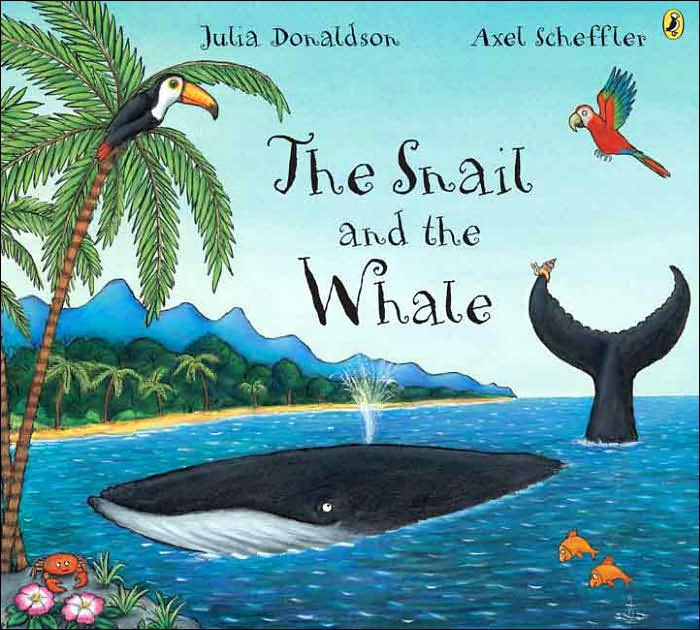 The Snail and the Whale is a predictable but cute story.  A snail with a bit of wanderlust feels stuck in his own small place in the world.  She doesn't know how to break out of her shell (so to speak) until a whale comes by and offers to take her on a tour of the world.  The snail gets to see icebergs and penguins, beaches and mountains, waves and the depths of the sea.  She is amazed because all of these things are so marvelous and she starts feeling quite small and insignificant.  But then one day a bunch of people in speedboats confuse the whale and he ends up beaching.  Now is the snail's chance to prove her worth by finding a solution to this urgent problem.

Though the humpback whale would probably not have survived the beaching in real life, this is thankfully a children's story that is not preaching the evils of personal watercraft but instead teaching about finding your own strengths and putting them to good use.  I love the colors in this story and Z loves all of the animals. 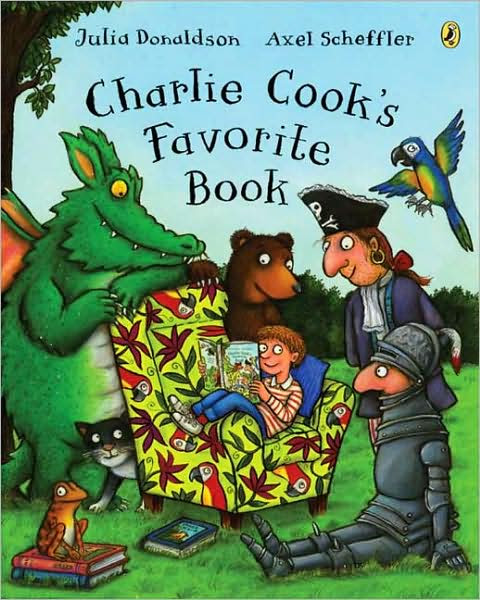 I love the idea that every story can lead to another one and maybe not in obvious ways.  Z likes this one quite a bit as well though I haven't asked him what draws him in to it.

The final book is The Fish Who Cried Wolf which has awkward verse and a strange story and neither Z or I have connected with it very well.  It's the story of a fish who is a bit of a fibber so when he tells a whopper, the other little fish don't believe him.  The strange thing though is that his story-telling actually helps him out at one point so I'm not sure the moral is quite clear.  The one thing Z did like in this book is that Scheffler snuck in a "gruffalo fish" on one page!

We're glad to have finally discovered Donaldson, who appears to be quite popular in the UK.  She has other books with Scheffler and some with other illustrators as well so we will have to keep exploring this fun new-to-us author.


Support our site and buy The Gruffalo,

, The Snail and the Whale

and Fish Who Cried Wolf

on Amazon or find them at your local library.  We borrowed some of these from the library and own one of them.
Posted by Kristen M. at 12:13 AM