"It was dark where she was crouched but the little girl did as she'd been told." 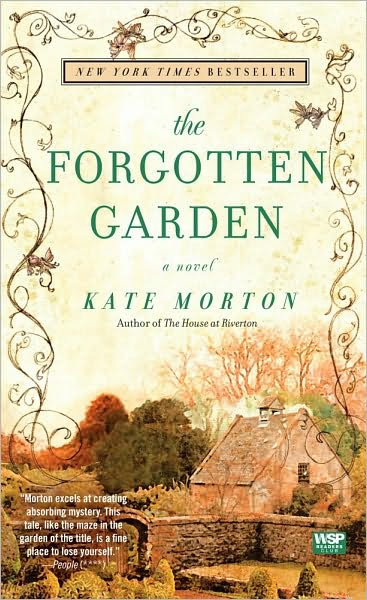 Despite a similar disappointment with the mystery element that I also experienced with Kate Morton's first novel, The Forgotten Garden

was an enjoyable tangled-web of a story. It begins by showing us an abandoned four year old girl on a ship from England to Australia. At first, she keeps her identity a secret as part of a supposed game but then she hits her head and actually forgets her name and her family. She is adopted by a kind couple in Australia and is raised in complete ignorance of her history. When she turns twenty-one, her father finally reveals that she is not their actual daughter. It is then Nell's obsession to find out who she really is and why she was put out to sea. It turns out to be a tale that won't be fully revealed for generations.

This novel is a bit confusing as it moves through time--from 1900 to 1913 to 1930 to 1975 to 2005--with plenty of back-and-forth and other times in between. Eventually, though, it all fits together in a satisfying way. Like I mentioned earlier, the big mystery of the story is given away rather early if you are paying attention but it is the unfolding of the events that is the real focus of the book. Some of the character decisions are quite unbelievable, there are a few slightly-supernatural moments and the tie-in with Frances Hodgson Burnett and The Secret Garden is a bit tenuous, but, then again, this is a story of fairy tales and so I suppose a suspension of disbelief is assumed. I really enjoyed reading about Brisbane and this has renewed my goal of reading more Australian-set fiction.

Have you read any Kate Morton novels? Do you figure out the mysteries early?


Support our site and buy The Forgotten Garden on Amazon or find it at your local library. We bought our own copy of this book.