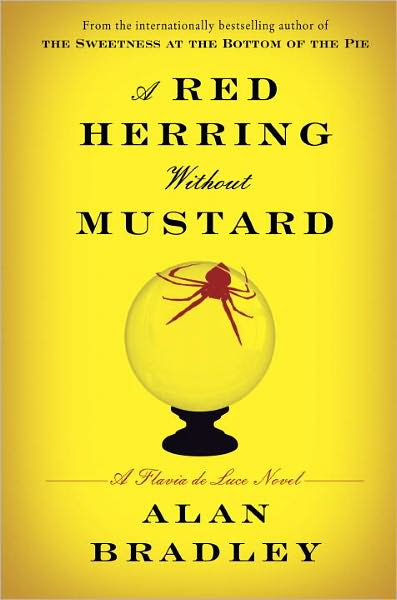 The third book in Alan Bradley's wonderful Flavia de Luce series has just been released and I have just one word for you -- LOVE. After a stellar debut (The Sweetness at the Bottom of the Pie

), I had nothing but the highest hopes for A Red Herring Without Mustard

. I was happily not disappointed in the slightest.

Flavia de Luce is still eleven years old, living with her father and two sisters at Buckshaw, the decaying estate that they inherited from their mother. Things are financially tough for them but they are worse for the old Gypsy that Flavia meets at the local fête and who is almost killed on de Luce property the same night. When another body turns up in the yard the next day, Flavia gets tangled up in solving more than one mystery and has to dig into the past for some of the answers.

I read almost the entire 400 page book in one day. I didn't get the laundry done. I didn't make it to the grocery store. I took the book out to read during brunch. I only had a couple of minor complaints come up while I was reading but they aren't even big enough to mention here -- just little character elements. This is a fantastic novel that has Flavia maturing a bit and yet also showing a little more weakness. I wonder how much Flavia is going to age over the remaining three books. It's going to be a difficult wait for the next one!

Finding no mystery in why this series is beloved,
K


Support our site and buy A Red Herring Without Mustard on Amazon or find it at your local library. We bought our own copy.