"There were five of us--Carruthers and the new recruit and myself, and Mr. Spivens and the verger." 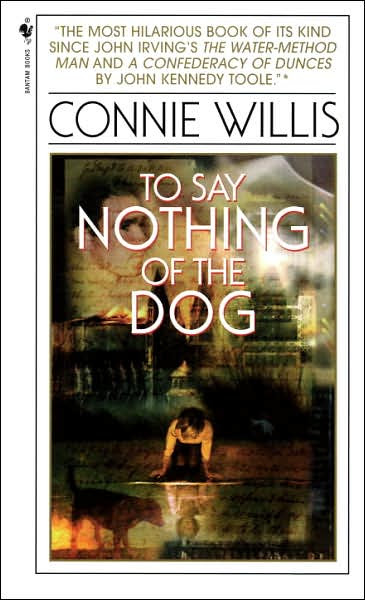 Again, I have to thank Teresa for suggesting that I pick this book up sooner than later. She guess correctly that this was a book that I would enjoy. Based on Jerome K. Jerome's Three Men in a Boat, Connie Willis' To Say Nothing of the Dog

is a time-travel comedy of errors with a touch of romance and a whole lot of Victorian manners and I loved it!

Ned Henry is a time-traveling historian who is on a tedious and seemingly impossible quest to find the location (in time and space) of something called a "bishop's bird stump" for the detailed rebuilding of the Coventry Cathedral in 2057. His quest is interrupted by the arrival of fellow historian Verity Kindle and the item she's brought forward from the past. Since it's not supposed to be possible to move anything through time, Ned is quickly dispatched to return the item to its place in Victorian times. Unfortunately, he's suffering from something called time-lag -- a condition related to excessive time travel that has such symptoms as Difficulty in Distinguishing Sounds, Tendency to Sentimentality and Drowsiness. So when he heads to the past, he is a bit confused as to what he is supposed to do, where he is supposed to go and, really, what one is supposed to act like in Victorian England. Some of the little information he has is what he knows from having read Three Men in a Boat -- a book that is about to be written. What follows is a complex and funny set of events that spans decades and may or may not cause Hitler to win the war.

I had such a great time with this novel. It was a mix of a couple of genres that I love and it could have gone totally wrong but it didn't. It was fun and addictive and, though it definitely won't be for everyone, I would hope that if it sounds interesting to you, that you would pick it up. I had it on my To Be Read list for far too long when it could have been on my list of favorite novels instead. (And yes, I do think it helped to have read Three Men in a Boat first but I don't think it's a requirement. But why not read two good books instead of just one?)


Support our site and buy To Say Nothing of the Dog

on Amazon or find it at your local library. We borrowed a copy from the library, read it and then promptly went out and bought a copy for our home collection.
Posted by Kristen M. at 12:36 AM