"There were four of us -- George, and William Samuel Harris, and myself, and Montmorency." 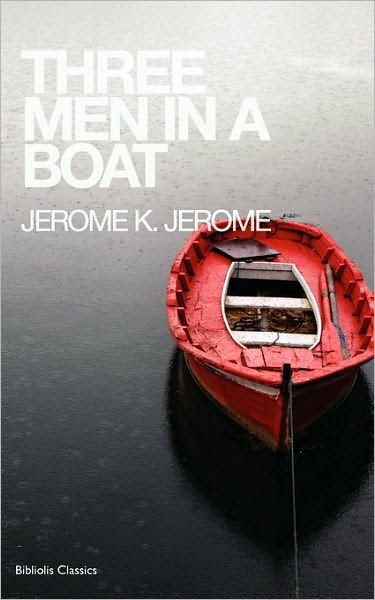 The other day I was talking with Teresa of Shelf Love on Twitter about books that make you think of other book bloggers while you're reading them. I was in the middle of one that I knew another blogger would have issues with. We chatted for a bit about that and then she mentioned that she had just finished Connie Willis' To Say Nothing of the Dog (read her review here) and thought that I would love it as much as she did. Well, that one has been on my "to read" list for years but before I read it, I wanted to read the book that inspired it -- Jerome K. Jerome's Three Men in a Boat

(subtitled To say nothing of the Dog!).

Jerome K. Jerome (his actual name -- his father was Jerome C. Jerome) set out to write a guidebook, which was the popular thing at the time, and ended up with a hilarious but thoughtful story of the adventures of three men and a dog on the Thames. The narrator, J., is a take-charge type -- he likes to have the responsibility of telling other people what sort of work they should be doing. His companions George and Harris are a bit lazy and daft but they decide together that they all need a break from their daily routines and a boat trip on the river sounds just the thing.


George said:
'Let's go up the river.'
He said we should have fresh air, exercise and quiet; the constant change of scene would occupy our minds (including what there was of Harris's); and the hard work would give us a good appetite, and make us sleep well.
Harris said he didn't think George ought to do anything that would have a tendency to make him sleepier than he always was, as it might be dangerous. He said he didn't very well understand how George was going to sleep any more than he did now, seeing that there were only twenty-four hours in each day ..."

After the trouble of making lists, packing and a late start on the first morning, they are off to row, tow and sail up the Thames. Between the items that they forget to take (a can opener) and the things they should have left behind (a banjo), they are in for an interesting trip. Mixed in with the narrative of the current adventure, J. tells stories of past boating adventures and second-hand stories from other river travelers. He also dishes up a bit of philosophy along with a boat-load of humor.

Written in 1889, this novel definitely seems to be transitioning in language from the Victorian to the modern. It's an easy read and Jerome's timing is perfect. If I started quoting all of the passages I found witty or hilarious, I would copy about half of this 170 page story. This one was a pleasure to read and I'm excited to see how Connie Willis' time-traveling protagonist fares when faced with a Victorian outing and only his knowledge of Jerome's story to guide him. I will also be reading the further adventures of J., George and Harris as they attempt a bicycle tour of Germany in Three Men on the Bummel.

Off for adventure,
K


Support our site and buy Three Men in a Boat and Three Men on the Bummel on Amazon or find it at your local library. We borrowed a copy from the library but will be purchasing our own copy soon!