At Home with Henrietta 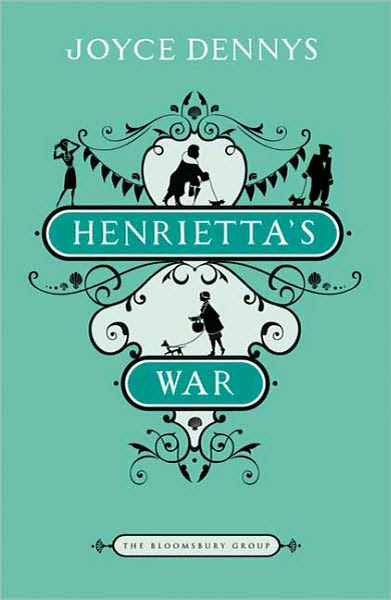 Henrietta Brown is the creation of Joyce Dennys. In 1939, Dennys began regular submissions of fictional letters to Sketch magazine in which she was Henrietta, a middle aged woman living on the Devon coast and writing (and sketching adorable little drawings) to Robert, a childhood friend away at war in France. These letters were very popular and she continued writing them until the war ended in 1945. The subtitle on these books is "News from the Home Front" and that pretty much says it all. Henrietta writes about gardening, cooking, clothing and so many other things from the point of view of a Doctor's Wife in a village setting. All of these aspects of life are affected by the war but Henrietta also knows (especially from the grumblings of the London evacuees) that they are also lucky to be where they are.

There is an amusing cast of characters in these letters, from the aging Lady B, who is always able to stay calm and look on the bright side, to the irritable Mrs. Savernack, who treats Henrietta like she's a bit simple and utterly hopeless. The group of people from the town have children fighting in this war and some have even lost children in the last war. They are trying to cope without friends, husbands and all of the niceties in life. Silk stockings must be worn with "ladders" (runs) because there are no replacements. Fuel shortages make people close up parts of their homes to economize. Walks on the shore are hampered by barbed wire and land mines. These letters reveal so many of the small details about life at home in England during the war that one might have heard of but never put together in such a complete picture.

and Henrietta Sees it Through: More News from the Home Front 1942-1945

. I suppose they were divided in order to avoid a 300+ page collection but I decided to sit down and read both books back to back and I didn't lose interest at all. In fact, I found it more satisfying to have VE Day to look forward to at the end, rather than stopping on a melancholy note in the middle of the war.

Also, I'm happy to finally get to one of these beautiful Bloomsbury books (my copy of Henrietta's War is actually an older Penguin edition). I have heard so many good things about the series and now I truly appreciate what they have brought back in print. This pair of novels present a unique portrait of a segment of the British population that is regularly forgotten behind the tragedy and magnitude of the Blitz. I can't recommend these books enough to anyone interested in a sweet but melancholy stay in Devon during WWII.

Taking nothing for granted,
K

and Henrietta Sees It Through: More News from the Home Front 1942-1945 (Bloomsbury Group)

on Amazon or find them at your local library. We bought our own copy of the first and received a review copy of the second from LibraryThing.
Posted by Kristen M. at 12:48 AM