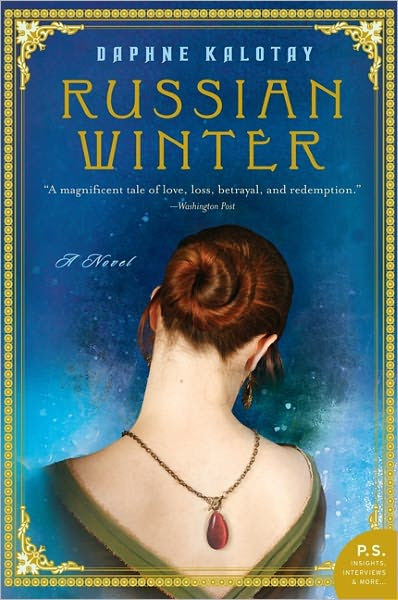 by Daphne Kalotay will sweep you up in the tragedies of life in Soviet Russia and have you hoping and praying for present-day redemption. There are many narratives in this novel including those of the young Nina Revskaya, ballerina at the Bolshoi and also her ailing modern self, now residing in Boston. There is also Grigoiri Solodin, a professor who was adopted as a newborn in Russia and who believes he has traced his parentage to Nina through the few small artifacts he inherited. And finally there is Drew Brooks, a woman who works at the auction house where Nina Revskaya is selling her famous jewelry collection. Though the lives of these people seem to have little in common, we see that there are common human threads that run through each of their lives.

I'll admit to having lost track of time and I started this book a bit late but it wasn't a chore at all to read this almost-500-page book over the course of three days. I got caught up in Nina's story and couldn't wait to find out what had happened to cause her defection from the Soviet Union and to learn if Grigori was really her son. Some readers might be a bit put off at first by the switching of tenses in the novel (the past story is written in the present tense) but after a while it simply becomes the natural rhythm of the book. There were a few slightly redundant parts and it took me some time to care about Grigori and Drew's stories but it all came together nicely by the end. As for Nina, I fell in love with her, as did so many others, and her story slowly broke my heart.

As I was reading this novel, I realized that though I frequently read novels set in Russia, they are never set in this time period of Stalin and Communism. I enjoyed this journey and appreciated the depth of Kalotay's research. The artforms that she chose to include in the story--ballet, music and poetry--are all well-incorporated as well and make this an epic sort of novel.

This novel is currently on a TLC Book Tour. You can read other reviews at the following sites:

Other reviews will be linked up at the tour page during the coming month.

Support our site and buy Russian Winter on Amazon or find it at your local library. We received a finished copy for review.