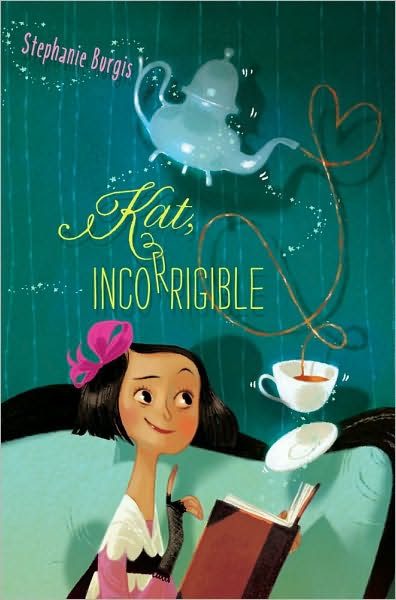 Out tomorrow is the middle grade fantasy novel Kat, Incorrigible

by Stephanie Burgis, the first of the new Unladylike Adventures of Kat Stephenson series (also called A Most Improper Magick in the UK). I really wanted to love this book and after reading some glowing reviews, I thought it was pretty likely. This is the story of twelve-year old Katherine Ann Stephenson, who lives in pre-Regency England with her clergyman father, horrid stepmother, two older sisters and troublemaking older brother. Her life changes entirely when she finds that what she inherited from the mother she never knew is a magic stronger than witchcraft. The question is if she can harness the magic soon enough to save one of her sisters from having to marry for money and to save the other sister from her own magical dabbling.

This just seemed like such a perfect match for me and yet I found myself nitpicking while I was in the story and, worse, for days after. Now, before I complain, I did think this was a cute story and it will probably be a fun series but ...
... I wasn't transported to 1803 at any point in the story. Everyone was far too modern and there were very few period details. There were also no cues in the language as to when it was supposed to happen except that Kat called her parents Papa and Stepmama. This book could have easily taken place at any time in a 100 year range.
... too many characters were trapped in Austen-esque stereotypes. This book was populated by just exactly the characters that you would assume would be in it -- the mother that dies in childbirth, the brother with gambling debts, the cruel, society-climbing stepmother, the absent-minded (and absent) clergyman father, the charming but poor suitor, etc. I know that the kids that this book is meant for will not have read Jane Austen and Georgette Heyer yet but I think it does them a disservice to present these characters in such a bland and predictable way. The book also just seemed overpopulated.
... the magical portions of this story were too derivative of Diana Wynne Jones, JK Rowling and others, and not in a new and fresh way. The idea of magicians that police other magicians was perfected in the Chrestomanci stories and in Rowling's Aurors. I just found myself wishing those noble characters would show up.
It is obvious that Burgis really loves Austen and Heyer (as many of us do) but I just don't feel that she did enough with her own story to make it as wonderful as the novels that inspired it. I would recommend Stevermer and Wrede's Sorcery and Cecelia or The Enchanted Chocolate Pot

instead of this book for its strong period feel, interesting characters and unique magic but I also don't think any child would be harmed by reading this book.
(I am counting this book as my second read for the Once Upon a Time challenge.)
Seeking out the best magic,
K
Support our site and buy Kat, Incorrigible

on Amazon or find it at your local library. We received an Advance Reader's Copy for review.
Posted by Kristen M. at 12:14 AM