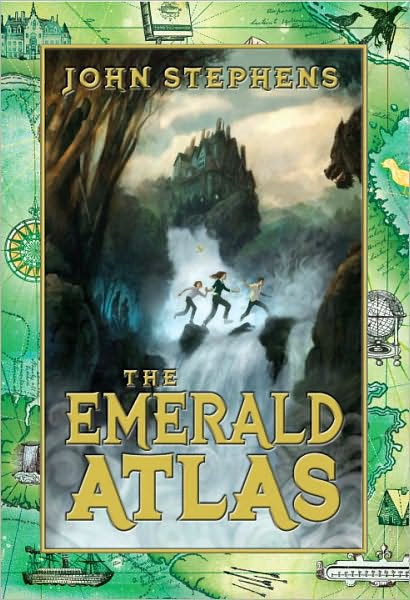 by John Stephens is one of those books that you almost regret reading so soon after it's published because you want so badly to be able to read the second and third books in the series immediately after finishing the first. The up-side is that when the second book in the Books of Beginning trilogy is released, there won't be any hesitation in doing a quick re-read of this one first! In fact, I think there would be a lot to get out of a re-read of this complex story.

This is an intense middle grade novel that follows three pseudo-orphans: Kate, Michael and Emma. Their parents were forced to give them up at a young age for their own safety and, though they promised to return for them, the kids have spent years going from one orphanage to another. Finally, they have hit what they hope is rock-bottom and are sent to the mysterious Dr. Pym and his decrepit orphanage in a town that may or may not exist and where they appear to be not only the lone children in the mansion but also the only children in the town. It's not long after they arrive there that they are swept up in the world that they were supposed to be protected from -- the world of magic.

Even as a stand-alone novel, this is a wonderful story. There were some elements that were a bit derivative of other fantasy stories but that is true of almost all fantasy these days. The way this book was written is fresh and exciting and I had a great time reading it. For a middle grade novel, I was impressed by the depth of some of the plot lines and the terrible things that the children had to face. And yet nothing seemed inappropriate for a young, adventurous reader. There were also some great adult characters in the story -- the caretaker Abraham, the warrior Gabriel and the charming Dr. Pym. In fact, I'm having trouble finding my next read because nothing else seems interesting after finishing this adventure!

I have to admit that I'm even tempted to use these iron-on templates to make myself an Emerald Atlas t-shirt. And as for which copy to buy (since we have an ARC, which is not very satisfying when contemplating a re-read), it will be very hard to choose between the U.S. cover (above) and the U.K. one to the left. They are both pretty awesome!

Waiting for the rest of the adventure,
K


Support our site and buy The Emerald Atlas (Books of Beginning)

on Amazon or find it at your local library. We received an Advance Review Copy but will be buying a finished copy for our home library.
Posted by Kristen M. at 12:14 AM