"Now that I'm dead I know everything." 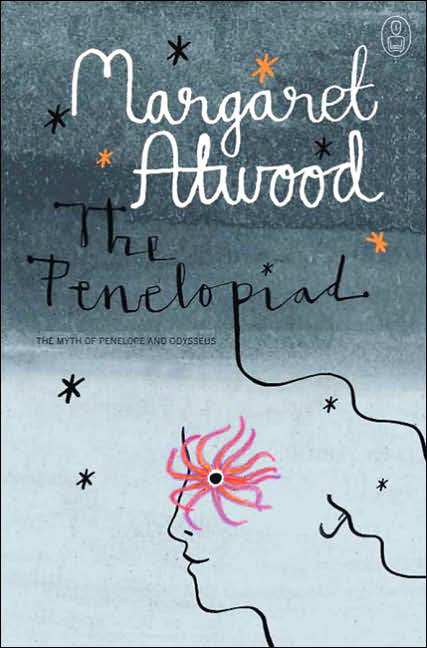 A couple of weeks ago, Bellezza and Col decided to read Margaret Atwood's The Penelopiad

together and invited anyone who wanted to join them. I've had this one on the shelf for a while in a box set with a couple of other books in the Canongate Myths series. The purpose of this series is to "[retell] a myth in a contemporary and memorable way". As I had yet to remove the plastic wrap from the box, I took advantage of the opportunity to fit this slim volume into my reading schedule.

The Penelopiad is a retelling of the Odysseus myth from two alternate points of view -- that of Penelope, Odysseus' wife, and, in the form of a Greek chorus, that of the twelve servant girls that were hung when Odysseus returned from his voyage. Penelope's portion is told from a modern point of view and in a semi-modern voice, as she walks eternally through the fields of asphodel in the afterlife. She begins with her birth, then her marriage to Odysseus and finally her long wait while he was away for twenty years. She tells which portions of the myth were accurate and which were a misinterpretation of the actual facts.

I thought this was a clever little novella that seemed to lose its way a bit toward the end when it delved too much into modern day feminist interpretations of Odysseus' behavior. As The Odyssey is one of my favorite stories, I was a bit concerned about the possible demonization of Odysseus but I thought that Penelope was quite fair in her descriptions of him. The chorus of dead servant girls, on the other hand, were less amusing and I wasn't sure whether they were trustworthy or just vindictive and angry in their interpretations of events. I'll be interested to see how the other readers in the group felt about this.

I think that the book contains enough summary information to be readable even by those who haven't read The Odyssey or are only generally familiar with the story. But, as you can imagine, the story is enhanced with a deeper knowledge of the original myth.


Support our site and buy The Penelopiad: The Myth of Penelope and Odysseus on Amazon or find it at your local library. We bought our own copy.