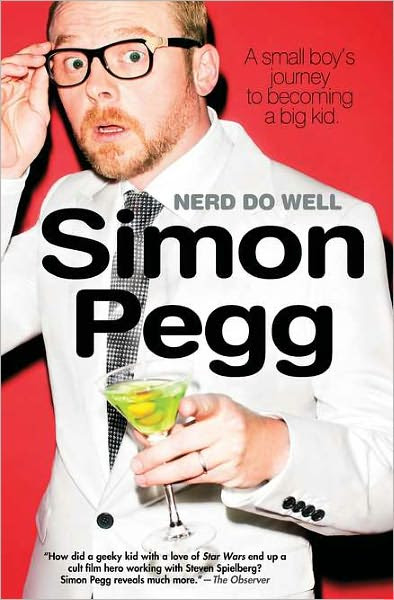 I will admit that when I saw this book was going to be featured on a TLC Tour, I contacted them immediately and begged to be included. I am a pretty big fan of the author's films and the television show, Spaced, that he created. And though I rarely read memoirs, this was one that I was really curious about. So, as you can imagine, my expectations were quite high for this book and thankfully it didn't disappoint. It definitely bodes well for a comedian/actor's memoir if they can make you laugh on the first page of the book. And laugh I did, half-way down the first page of Simon Pegg's Nerd Do Well: A Small Boy's Journey To Becoming a Big Kid

You hopefully know Simon Pegg from his films Shaun of the Dead (a zombie comedy), Hot Fuzz (a small-town murder comedy) and Paul (an alien-visitation comedy) -- or at least his role as Montgomery Scott in the recent Star Trek reboot where he affects the cutest Scottish accent. If you aren't familiar with any of these, please go watch the trailer for my current favorite (which he co-wrote), Hot Fuzz with Simon as Officer Nicholas Angel, a London police officer sent away to a model village when he was too diligent. Of course, things are not going to remain calm for long when Angel's diligence uncovers the dark side of the seemingly happy town.

So now you probably have the gist of Simon's sense of humor. It's the backbone of the novel and his voice comes through quite clearly in his writing. The book is a combination of two parts -- the expected memoir of Simon's youth, education and early career interspersed with the story of a handsome super spy named, well, Simon Pegg. These chapters were absolutely hilarious to me but if you don't have the sense of humor of a fifteen-year-old fanboy (or the ability to enjoy that sort of humor), they might not really amuse you. The rest of the book is full of reminiscences of first films seen, childhood theater roles and musings on Star Wars among other things. It was fascinating to read about how Simon turned his youthful obsessions into a dream adulthood.

While the timeline skipped about a bit and sometimes took a little bit of work to follow, the content of this book was fun and I had a great time reading it. I'm sure it didn't hurt that Pegg is only five years older than I am so I was able to relate to some of his childhood experiences of the early 80s. My husband is excited to read it next and I think he'll relate to it even more than I did. Here's the book trailer (which is also rather funny) --


In a little nerd heaven,
K

This memoir is currently on a TLC Book Tour. You can read another review at

Other reviews will be posted throughout the month at the tour site.


Support our site and buy Nerd Do Well: A Small Boy’s Journey to Becoming a Big Kid

on Amazon or find it at your local library. We received an uncorrected proof for review.
Posted by Kristen M. at 12:12 AM